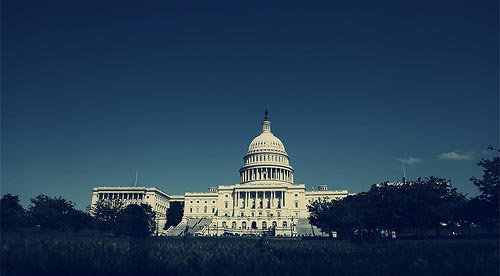 USDA, FDA and EPA Facing Cuts That Bring the Budget Fight Onto Our Dinner Tables

Leaders in Washington are proposing to cut food and water safety protections which would put more Americans in jeopardy of becoming sick or even dying from foodborne illness and would severely restrict the ability of municipalities to maintain their drinking water and wastewater infrastructure.

“At least 14 Americans died and many thousands became ill from tainted spinach, peppers, peanut butter and eggs in recent years,” said Wenonah Hauter, executive director of Food & Water Watch. “Now, Washington is seeking to slash the budget for our food and water protections, which will put more people at risk.”

In 2006, there was a massive recall of spinach found to contain E. coli. Salmonella-tainted peppers and peanut butter soon followed. And last year, over half a billion eggs from just two factory farms were recalled. At least 14 Americans died and many thousands became ill from those four major outbreaks in the past five years thanks to mistakes that made it into the food supply.

The original Republican proposal (House Resolution 1, or H.R. 1) for cutting the current FY 2011 federal budget would cut the budget for U.S. Department of Agriculture (USDA) meat inspections by $88 million, and would return funding for the Food and Drug Administration (FDA) to less than last year’s levels—putting them even further behind in meeting requirements of the new food safety law passed late last year. President Obama’s proposed 2012 budget would cut the USDA’s meat inspection budget by $9 million and increase the FDA’s budget—but not enough to implement the new Food Safety Modernization Act.

Federal funding for water infrastructure has also been targeted by the House, whose proposal cuts the Environmental Protection Agency’s State Revolving Funds for clean water (sewerage) and drinking water — the mechanisms through which federal funding is distributed to states and municipalities for water infrastructure repairs, maintenance and improvements—by  $1.967 billion to finish out the current fiscal year. These funds would also be drastically reduced under Obama’s proposed FY 2012 budget.

In addition to the nationwide public safety alert, Food & Water Watch will next week launch a public outreach campaign to save food and water protections from further cuts. A new 60-second television ad produced by Jackson Group Media will air as part of a five-figure media buy targeting Members of Congress, President Obama and opinion leaders in Washington, D.C. Additionally, the ad will air in Speaker of the House John Boehner’s (R-OH) congressional district. A nationwide Internet campaign will also be launched and will include the new ad.

The ad can be viewed here: http://action.foodandwaterwatch.org/p/dia/action/public/?action_KEY=5935

As part of their Internet outreach plan, Food & Water Watch asks citizens to visit their Web site (www.foodandwaterwatch.org) and to take action there by telling their representatives not to cut food and water protections.

“Slashing the budgets of the agencies responsible for keeping our food and water supply clean, safe and accessible is short-sighted,” said Hauter. “President Obama should not let House Republicans gut these protections, and should step up to make sure the budget bolsters our ability to provide Americans with a safe supply of food and water.”