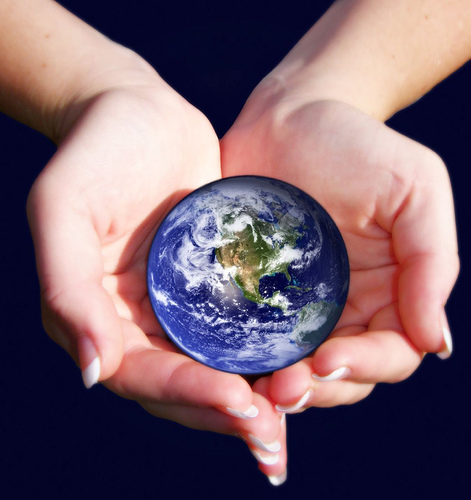 For over 40 years, Earth Day has served as a call to action, mobilizing individuals and organizations around the world to address these challenges. This year Nourishing the Planet highlights agriculture—often blamed as a driver of environmental problems—as an emerging solution.

Agriculture is a source of food and income for the world’s poor and a primary engine for economic growth. It also offers untapped potential for mitigating climate change and protecting biodiversity, and for lifting millions of people out of poverty.

This Earth Day, Nourishing the Planet offers 15 solutions to guide farmers, scientists, politicians, agribusinesses and aid agencies as they commit to promoting a healthier environment and a more food-secure future.

1. Guaranteeing the Right to Food

Guaranteeing the human right to adequate food—now and for future generations—requires that policymakers incorporate this right into food security laws and programs at the regional, national, and international level. Governments have a role in providing the public goods to support sustainable agriculture, including extension services, farmer-to-farmer transmission of knowledge, storage facilities, and infrastructure that links farmers to consumers.

2. Harnessing the Nutritional and Economic Potential of Vegetables

Micronutrient deficiencies, including lack of vitamin A, iodine, and iron, affect 1 billion people worldwide. Promoting indigenous vegetables that are rich in micronutrients could help reduce malnutrition. Locally adapted vegetable varieties are hardier and more dependable than staple crops, making them ideal for smallholder farmers. Research organizations like AVRDC/The World Vegetable Center are developing improved vegetable varieties, such as amaranth and African eggplant, and cultivating an appreciation for traditional foods among consumers.

Experts continue to emphasize increasing global food production, yet our money could be better spent on reducing food waste and post-harvest losses. Already, a number of low-input and regionally appropriate storage and preservation techniques are working to combat food waste around the world. In Pakistan, farmers cut their harvest losses by 70 percent by switching from jute bags and containers constructed with mud to more durable metal containers. And in West Africa, farmers have saved around 100,000 mangoes by using solar dryers to dry the fruit after harvest.

5. Getting More Crop per Drop

Many small farmers lack access to a reliable source of water, and water supplies are drying up as extraction exceeds sustainable levels. Only 4 percent of sub-Saharan Africa’s cultivated land is equipped for irrigation, and a majority of households depend on rainfall to water their crops—which climate scientists predict will decline in coming decades. Efficient water management in agriculture can boost crop productivity for these farmers. By practicing conservation tillage, weeding regularly, and constructing vegetative barriers and earthen dams, farmers can harness rainfall more effectively.

Africa’s declining soil fertility may lead to an imminent famine; already, it is causing harvest productivity to decline 15–25 percent, and farmers expect harvests to drop by half in the next five years. Green manure/cover crops, including living trees, bushes, and vines, help restore soil quality and are an inexpensive and feasible solution to this problem. In the drought-prone Sahel region, the Dogon people of Mali are using an innovative, three-tiered system and are now harvesting three times the yield achieved in other parts of the Sahel.

Over the past few decades, traditional African agriculture based on local diversity has given way to monoculture crops destined for export. Less-healthy imports are replacing traditional, nutritionally rich foods, devastating local economies and diets. Awareness-raising initiatives and efforts to improve the quality of production and marketing are adding value to and encouraging diversification and consumption of local products. In Ethiopia’s Wukro and Wenchi villages, honey producers are training with Italian and Ethiopian beekeepers to process and sell their honey more efficiently, promote appreciation for local food, and compete with imported products.

Global climate change, including higher temperatures and increased periods of drought, will negatively impact agriculture by reducing soil fertility and decreasing crop yields. Although agriculture is a major contributor to climate change, accounting for about one-third of global emissions, agricultural practices, such as agroforestry and the re-generation of natural resources, can help mitigate climate change. In Niger, farmers have planted nearly 5 million hectares of trees that conserve water, prevent soil erosion, and sequester carbon, making their farms more productive and drought-resistant without damaging the environment.

10. Harnessing the Knowledge and Skills of Women Farmers

According to the U.N. Food and Agriculture Organization, women represent 43 percent of the agricultural labor force, but due to limited access to inputs, land, and services, they produce less per unit of land than their male counterparts. Improving women’s access to agricultural extension services, credit programs, and information technology can help empower women, while reducing global hunger and poverty. In Uganda, extension programs are introducing women farmers to coolbot technology, which uses solar energy and an inverter to reduce temperatures and prolong the shelf life of vegetables.

As pressure to increase food production rises, wealthy countries in the Middle East and Asia are acquiring cheap land in Africa to increase their food productivity. This has led to the exploitation of small-scale African farmers, compromising their food security. Agricultural investment models that create collaborations between African farmers and the foreign investing countries can be part of the solution. In Ethiopia’s Rift Valley, farmers grow green beans for the Dutch market during the European winter months, but cultivate corn and other crops for local consumption during the remaining months.

Nearly 1 billion people around the world are hungry, 239 million of whom live in sub-Saharan Africa. To alleviate hunger, we must shift our attention beyond the handful of crops that have absorbed most of agriculture’s attention and focus on ways to improve farmers’ access to inputs and make better use of the food already produced. Innovations—such as the human-powered pump that can increase access to irrigation and low-cost plastic bags that help preserve grains—offer models that can be scaled-up and replicated beyond Africa.

13. Moving Ecoagriculture into the Mainstream.

Agricultural practices that emphasize increased production have contributed to the degradation of land, soil, and local ecosystems, and ultimately hurt the livelihoods of the farmers who depend on these natural resources. Agroecological methods, including organic farming practices, can help farmers protect natural resources and provide a sustainable alternative to costly industrial inputs. These include rotational grazing for livestock in Zimbabwe’s savanna region and tea plantations in Kenya, where farmers use intercropping to improve soil quality and boost yields.

In the coming decades, small livestock farmers in the developing world will face unprecedented challenges: demand for animal-source foods, such as milk and meat, is increasing, while animal diseases in tropical countries will continue to rise, hindering trade and putting people at risk. Innovations in livestock feed, disease control, and climate change adaptation—as well as improved yields and efficiency—are improving farmers’ incomes and making animal-source food production more sustainable. In India, farmers are improving the quality of their feed by using grass, sorghum, stover, and brans to produce more milk from fewer animals.

Although scarcity and famine dominate the discussion of food security in sub-Saharan Africa, many countries are unequipped to deal with the crop surpluses that lead to low commodity prices and food waste. Helping farmers better organize their means of production—from ordering inputs to selling their crops to a customer—can help them become more resilient to fluctuations in global food prices and better serve local communities that need food. In Uganda, the organization TechnoServe has helped to improve market conditions for banana farmers by forming business groups through which they can buy inputs, receive technical advice, and sell their crops collectively.

To purchase State of the World 2011: Innovations that Nourish the Planet please click HERE. To watch the one minute book trailer click HERE.