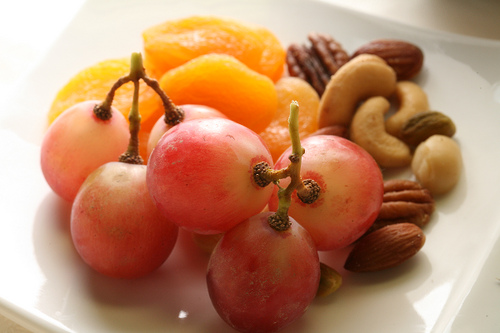 The Mediterranean diet is not only good for its more well-known reasons — protecting against heart disease and cancer. According to a new study published in the Archives of General Psychiatry, the Mediterranean diet, rich in fresh fruits and vegetables, whole grains, olive oil, nuts, and fish, may decrease risk of depression.

Spanish researchers reported that 30% of patients who followed the Mediterranean diet (high in monounsaturated fats such as olive oil and low in saturated fats from meat and dairy products; including moderate intake of alcohol, and high intake of legumes, fruits, veggies, nuts, and grains) were at a lower risk of mental illnesses compared to populations who did not adhere to such a diet. It also showed that the main followers of the Mediterranean diet are males, ex-smokers, married people, and elderly individuals.

“The specific mechanisms by which a better adherence to the Mediterranean dietary pattern could help to prevent the occurrence of depression are not well known,” the researchers report. To explain how exactly the Mediterranean style of eating links to protection against depression, however, more studies have to be performed.

The researchers do think it is not individual components on their own but the whole diet combined that is important for protecting against depression. Almudena Sanchez-Villegas, the lead researcher of the new study, says:

The role of the overall dietary pattern may be more important than the effect of single components. It is plausible that the synergistic combination of a sufficient provision of omega-three fatty acids together with other natural unsaturated fatty acids and antioxidants from olive oil and nuts, flavonoids and other phytochemicals from fruit and other plant foods and large amounts of natural folates and other B vitamins in the overall Mediterranean dietary pattern may exert a fair degree of protection against depression.

These optimistic findings can lighten up a society touched heavily more and more by depression.

The Mediterranean diet is well known for helping to reduce a person’s weight, improve mental sharpness and reduce the cholesterol, which can harden the arteries. Moreover, it is becoming a popular green style of eating due to the fact that its followers consume little amount of meat (which increase carbon emissions). Here is one more reason to try out the Meditarranean.