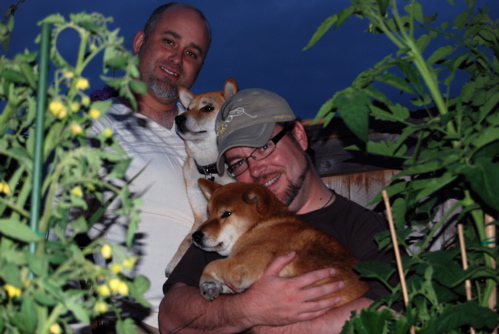 From local and regional press reports about a rise in garden-related sales in the face of the economic downturn to the Internet buzz generated by those San Francisco-bound locavores eager to see the city’s new civic center victory garden, there’s plenty to spark interest in getting one’s dirt under one’s nails.

Yet if you’ve got only a small lot or just a patio to work with, you may feel out of the loop with the home garden craze. Prepare to join in the fun: a surprising amount of fresh produce can be grown in ordinary pots and planters.

Blogging jointly under the name “Shibaguyz,” the pair has documented every detail of their container garden’s progress this year, from seed to harvest to food preservation. Although they’d begun tinkering with plants together in 2007 at their new townhouse, it wasn’t until Shannon heard an NPR interview with Barbara Kingsolver about her wildly popular book, Animal, Vegetable, Miracle: A Year of Food Life, that the duo decided to go full-tilt with their container gardening effort.

“I was so enthralled with…[what Kingsolver]…had to say about the importance of local food and growing your own food as much as possible that I sat there in the garage in the dark listening until the very end,” observes Shannon in a recent virtual interview.

Inspired, the Shibaguyz revved up their gardening efforts. By mid-summer 2007, they were eating 90% of their food from the garden and their local farmer’s market. This year, “the Jungle,” as the pair jokingly refers to their prolific container garden, is equally robust. The gardeners credit John Jeavons’ acclaimed biointensive garden technique for their phenomenal success growing food in a 20′ x 20′ outdoor space.

Energized from their efforts at sustainable living in the city, the gardeners now blog regularly in support of a modern victory garden revival, hoping to spark wider interest among urban dwellers. Their readership is growing steadily, both in Seattle and elsewhere.

“For us, eating locally and having a victory garden of our own means we get to take one more step away from our dependence on foreign oil and the use of fossil fuels to produce and transport our food,” comments Shannon. “That means we have one more piece of independence we can be proud of. We feel stronger knowing that even if the entire industrialized food chain were to go down, we’d know how to take care of ourselves.”