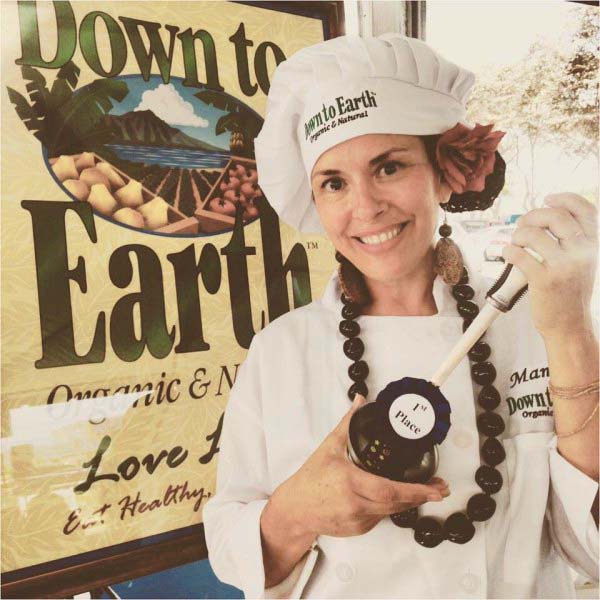 Mama T didn’t tell the tasters at the market (over 600 people) that her recipe was vegan, and her awesome recipe beat out two pretty famous local chefs and their meat-based recipes at the event!

The recipe is a secret (for now!) but she has shared a few of her winning ingredients with us. She started with a mixture of chilies, tomatoes, onions, green peppers and added a selection of meat alternatives: Field Roast Mexican Chipotle Sausage, Tofurkey’s Smokey Maple Bacon Tempeh (both favorites around our house too), Sweet Earth bacon, and veggie beef crumbles. But her favorite new chili ingredient is pureed, roasted eggplant. She says, “The eggplant added a sweet, creamy consistency that was indescribable.” When the judges asked her to share the ingredients with the crowd, she told them her secret was that there was no meat in the chili!

Chef Mama T is an activist and chef on Oahu, where she keeps busy helping the community enjoy delicious plant-based foods in dozens of ways. She leads the Community Outreach program for Down to Earth Natural and Organic, sharing recipes, cooking classes and workshops with the community, and in this role she hosts a cooking segment once a month on a local news station called Healthy and Delicious with Down to Earth.

In her other time, she is a passionate reggae singer sharing the stage with her beautiful family and lots of friends. She also works as the Assistant Director for the non-profit Native Like Water, teaching food as medicine to the younger generation. Mama T also teaches a free class on Molokai once a month called ‘Ai A Ola or Eat to Live that gives the Molokai community a chance to learn about the importance of organically grown food through interaction and food sharing. She also has her own cooking show called Ital Kitchen, teaching everyone that ‘ital is vital!’

I formally worked with Mama T at Down to Earth, and have shared many of her other delicious recipes on our sister site, Vibrant Wellness Journal:

And Mama T is not alone in her win: vegan chefs have been winning cooking contests all over the country. One of the first big ones was Chef Chloe Coscarelli, who won Food Network’s Cupcake Wars in 2010 with her selection of four vegan cupcakes. A year later two vegan chefs (and two mainstream bakers) faced off in another Cupcake Wars, with one of the vegan chefs winning. Winning baker Kim Garr of C’est La V Bakeshop told VegNews that seeing vegan chefs going mainstream is helping to expose people to the vegan lifestyle. “I hope it makes people curious and piques their interest and that it starts changing the way people look at food.”

I can only hope that all those shoppers and tasters at the farmer’s market last Saturday – and at state fairs, street food festivals, and beyond – have started to look at their OWN food in a different way too. Thanks to Mama T for bring plant-based food to even more people– so excited for your win, Mama T! Congratulations!