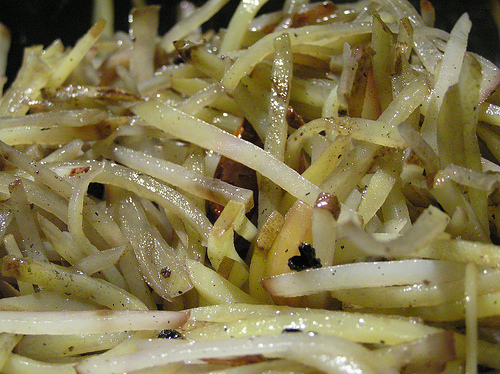 Ban the potato from school lunch? To hear some people talk, you might think that was about to happen.

On a weekly basis, there should be at least ½ cup each of dark green vegetables, orange vegetables, and legumes. No more than one cup of starchy vegetables should be served during the week.

A variety of vegetables served throughout the week will go a long way towards getting most of the nutrition kids need.

The most common complaint against potatoes is the method of preparation. The usual methods used in school lunch often leave a bit to be desired – either fried and served with salt and ketchup or mashed and served with butter and gravy.  Reducing those preparation methods will reduce calories from fat as well as reducing sodium intake.

A baked potato bar is usually popular with kids. Even with the toppings that everyone piles on to them, the baked potato still can come out nutritious, considering that it’s a whole meal to itself. Suggestions from the adults in the lunchroom can be helpful when the kids are choosing toppings.

So What’s the Problem?

It seems a bit backwards to say that potatoes are being punished. The intent behind the USDA’s proposed guidelines is to increase the variety of vegetables that kids are exposed to at a young age and at the same time increase the nutritional value of a week’s worth of school lunches.

Public comments closed on the USDA’s proposed guidelines on April 13, but industry groups are still lobbying congress. To get your voice heard on this, you’ll have to write your congressperson directly. Find your senators or representative and let them know how you feel about fewer potatoes served in school lunch.