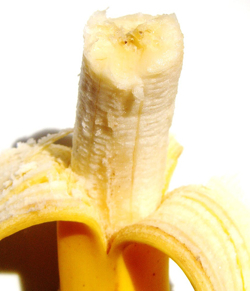 One weight loss diet fad is the “morning banana diet”.

Japan, a nation known for following some pretty wacky fads, is suffering a banana shortage because of it.

Akihiro Takenaka, a produce manager of a Tokyo supermarket, Ozeki, said the demands for bananas are still high and the supply simply cannot catch up.

“I have been in the produce business for almost 20 years and I have never seen this kind of phenomenon,” said Takenaka. “We usually purchase 15 cases of bananas every day, but we have not been able to secure that amount for the past few months. We are lucky if we get five cases. “

The basic rules of the morning banana diet are simple:

The man who started the craze in Japan is Hitoshi Watanabe, who lost 38 pounds in less than a year by following the diet. His wife, a pharmacist, came up with the plan as a way to help Watanabe lose the weight he gained from eating late dinners and no exercise. Bananas fit the bill for a filling, nutritious food relatively low in calories.

As Watanabe lost weight, he began posting the diet information on Mixi, the largest social networking service in Japan.

“I did not know so many people would show an interest. The response was just overwhelming.”

He was then approached with book offers, and now over 900,000 copies of the banana diet book have been sold, mostly in Asia.

According to ABC News, Dole Japan has had to increase banana imports by over 25% to cope with the demand. Grocery stores are selling bananas as fast as they can stock them, and people show up early just to score some.

What’s the truth about the morning banana diet?

Well, truth is where you find it. If people can lose weight eating lots of bananas, then it works… From my perspective, filling your belly with wholesome natural raw fruits all morning is a great way to change your eating habits. I know several people who are strong supporters of a raw food diet, and a few who eat a fruitarian diet, and it works for them. Obviously, diet is only part of the equation, and without adding exercise to your life, you probably are not going to experience lasting health or weight loss. Just my humble opinion…

Are there any raw foodists or fruitarians out there? Are you willing to comment on the banana diet?