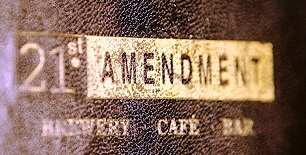 December 5th is Repeal Day. That day back in 1933 that ended those dark days of “The Great Experiment” that failed. For those who where sleeping during American History class, the Volstead Act was repealed by the Amendment XXI to the US Constitution:

Section 1.
The eighteenth article of amendment to the Constitution of the United States is hereby repealed.

Section 2.
The transportation or importation into any State, Territory, or Possession of the United States for delivery or use therein of intoxicating liquors, in violation of the laws thereof, is hereby prohibited.

Section 3.
This article shall be inoperative unless it shall have been ratified as an amendment to the Constitution by conventions in the several States, as provided in the Constitution, within seven years from the date of the submission hereof to the States by the Congress.

Why do we care seventy-five years later? Two words – Constitutional Rights. Something that was been challenged, bent and sometimes broken over the past 8 years

Jeffrey Morgenthaler over at Repealday.org has summed up four very good reasons.

It’s the perfect time of year.
Conveniently located halfway between Thanksgiving and Christmas – at a time when most Americans are probably not spending time with family – Repeal Day presents a wonderful occasion to get together with friends and pay tribute to our constitutional rights.

It’s easy!
There are no outfits to buy, costumes to rent, rivers to dye green. Simply celebrate the day by stopping by your local bar, tavern, saloon, winery, distillery, or brewhouse and having a drink. Pick up a six-pack on your way home from work. Split a bottle of wine with a loved one. Buy a shot for a stranger. Just do it because you can.

Repeal Day doesn’t exclude.
Are you an American, or are you located in the United States? Congratulations, you’re invited to join our party! Sorry, gay leprechauns, but Saint Patrick’s Day is off limits. Being French on Cinco de Mayo is about as cool as being British on the Fourth of July. But December Fifth is a day that’s open to anyone!

We have the constitutional ability to do so.
Unlike St. Patrick’s Day or Cinco de Mayo, Repeal Day is a day that all Americans have a part in observing, because it’s written in our Constitution. No other holiday celebrates the laws that guarantee our rights, and Repeal Day has everything to do with our personal pleasures.

Spread the word about Repeal Day and celebrate with a friend, enemy or lover!