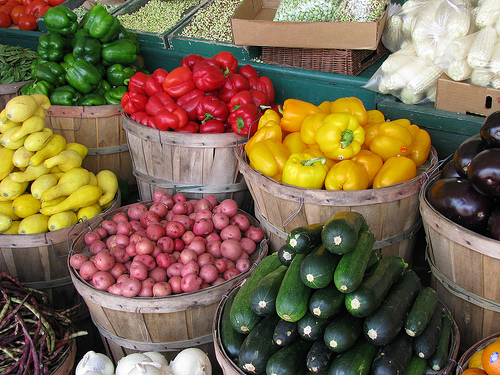 This weekend draws to a close National Farmers Market Week and across the country, farmers markets will be celebrating through special events, contests, cooking demonstrations, tastings, and much more. Since 2000, when the United States Department of Agriculture (USDA) first proclaimed National Farmers Market Week, the number of farmers markets has grown 150%, from 2,863 in 2000 to 7,175 in 2011. And, if you’re reading this blog you likely don’t need reasons to celebrate, the Farmers Market Coalition offers these reasons to feel good about your support and maybe inspire you to tell others about the many benefits of farmers markets.

They inspire community education. Farmers markets are hubs for information and home to thousands of innovative partnerships that teach skills and expand knowledge about food and agriculture. Look for community education partnerships taking place at many of the nation’s 7,175 farmers markets. Look for demonstrations of cooking, canning, composting, and pollinator-friendly gardening techniques, books on sustainable living, live music and children’s storytelling sessions.

They promote good nutrition and healthful habits.  Every day, more communities are converging at farmers markets to begin building healthful relationships with food. An abundance of nutritionally-dense, low-calorie fresh fruits and vegetables is one asset farmers markets bring to communities. While it makes sense that 92% of farmers markets have vendors that sell fresh fruits and vegetables, it is nice to know that 45% of the produce sold at farmers markets is organic, and more than 30% is chemical-free and pesticide-free.  Researchers at East Carolina University also found that proximity to farmers markets was associated with lower body mass index (BMI) among North Carolina youth, while density of fast-food and pizza venues was associated with higher BMI. Finally, the feel-good fact of the day is that according to psychologist Robert Sommer, people who shop at farmers markets have four-and-a-half times more social interactions per visit than they would have per visit to a grocery store.

They are economic engines. While unemployment hovers at record levels this summer, entrepreneurship is thriving in farmers markets as they are growing jobs and strengthening local and regional economies. Framers markets are proven to create  jobs, contribute to direct and indirect economic output, and generate millions in real income. Research also shows that farmers markets spur spending at neighboring businesses.  Studies of the Easton Farmers Market in Pennsylvania, for example, found that 70% of farmers market customers are also shopping at downtown businesses, spending up to an extra $26,000 each week.

They put farmers at the center of the system. According to the United States Department of Agriculture’s Economic Research Service, farmers receive only 15.8 cents of the average dollar consumers spend on food.  Farmers markets are one place where farmers can retain a higher proportion of the food dollar, and earn a fair wage. Returns for farmers at markets are generally 200 to 250 percent higher than what they receive from wholesalers.

They support food equity. Framers markets are a growing way to improve access to healthful foods in underserved neighborhoods. This summer, nationwide participation in the Supplemental Nutrition Assistance Program (SNAP) is at a record high of approximately 45 million Americans.  Fortunately, the families relying on this and other programs to put food on the table have a friend in farmers markets,, where an increasing number of low-income consumers are purchasing locally grown fresh fruits and vegetables. In 2010, participants in the Supplemental Nutrition Assistance Program (SNAP) redeemed more than $7.4 million in benefits at farmers markets. This represents more than a 70% growth in one year.  In the past five years, the number of farmers markets accepting SNAP benefits has increased 263%.  At least one hundred of these farmers markets are in what the USDA Economic Research Service considers food deserts.

They promote rural renewal. Supporting your farmers market is a great way to support agricultural diversity and farm viability, while inspiring a new generation of producers. The growth in farmers markets is occurring alongside another positive trend: growth in the number of small farms.  Despite consolidation in the agricultural industry and many other sectors, the number of small farms in America actually increased by 18,467 between 2002 and 2007.  The United States Census of Agriculture also found that operators of farms with annual sales between $100,000 and $249,999 are younger than average and are more likely to be full time farmers.  According to a survey conducted by the USDA Agricultural Marketing Service, 25% of farmers market producers rely on farmers markets as their sole source of farm income.  “America’s farmland is beautiful and bountiful ,” says Bernadine Prince, Vice President of the Farmers Market Coalition.  “Every meal we eat has the power to preserve rural America if we buy from local farmers.  National Farmers Market Week is a great opportunity to thank farmers for growing food and for being good stewards of the land and water.”

One final word: As glad as I am that there is special week for farmers markets, all farmers markets are worthy of celebration, not only during National Farmers Market Week, but throughout the year.

To find a market near you search for one in USDA’s Farmers Market Directory or at LocalHarvest.org and EatWellGuide.org.