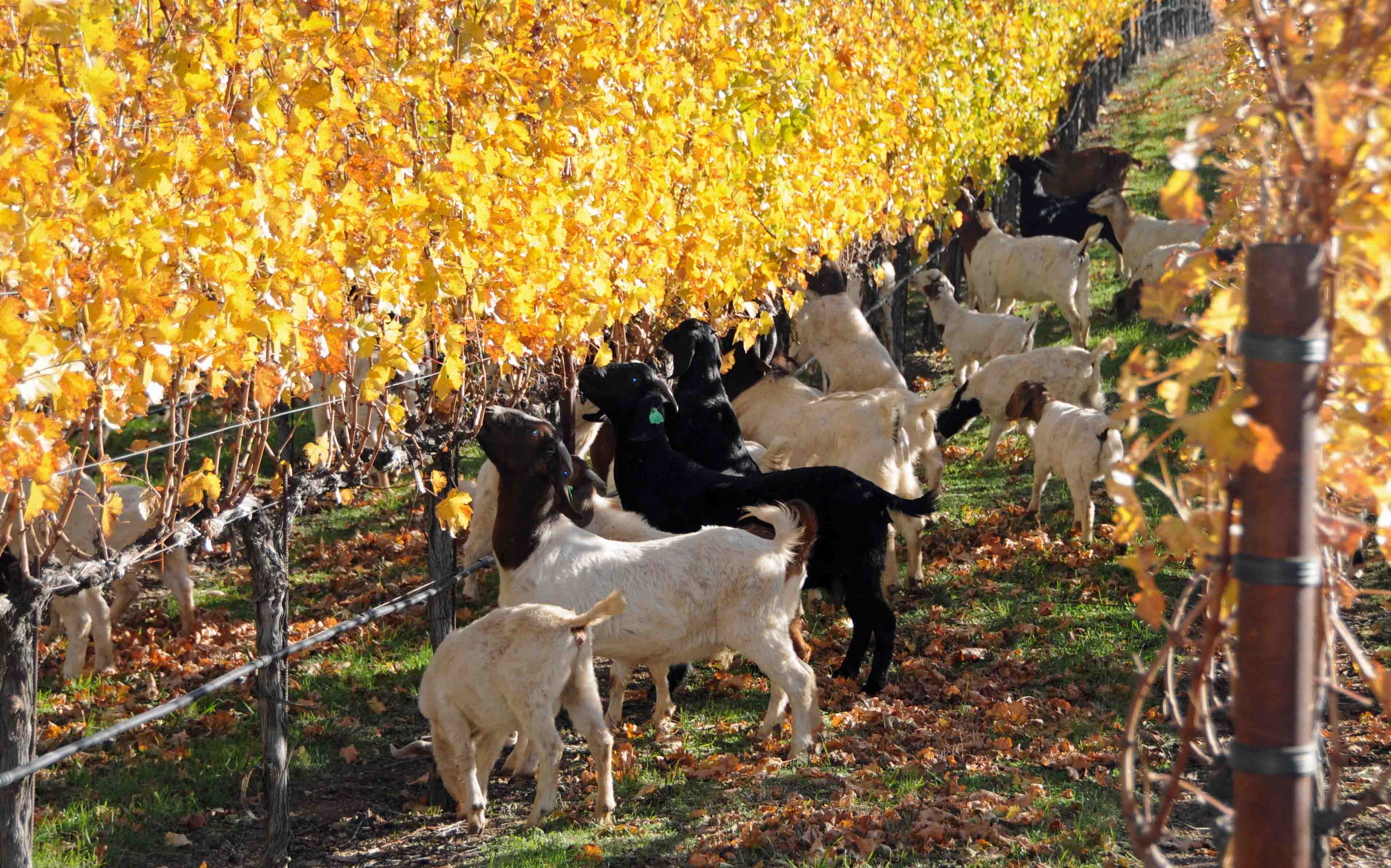 True or false?  Owls, falcons, bats, chickens, sheep, goats and dogs are among several creatures that are used as a low-impact natural methods to help control pests and cultivate vineyards by many winegrowers.

True. A whole host of wildlife hunt down and prey on vineyard pests. Specially trained dogs sniff out pheronomes of Vine Mealy bug pests that damage vines. Sheep and goats mow grasses in the vineyards. It’s fair to say that earth-friendly pest management strategies are on the rise, or rather, making a comeback. Here are five wineries that are leading the charge.

Parducci Wine Cellars, called by some ‘America’s Greenest Winery,’ regulates vineyard pests by “creating wildlife corridors and encouraging natural predators in the vineyard.” Owl boxes provide nests for owl families that feed on vine-damaging rodents and the folks at Parducci like to point out that a single owl can eat 50 lbs of gophers in a season. Parducci also creates bug farms to attract beneficial insects and installs bird boxes to house insect predators.

In 2008 the Hess Collection purchased 24 goats for ground clearing and underbrush management in their Mount Veeder estate vineyards. They didn’t know it then, but it turned out that several were pregnant. The herd quickly doubled and today about 150 goats wander around the Mount Veeder vineyards and are released into the vineyards prior to bud break to help with weed control and to reduce the use of tractors and tilling.

Last year Cayuga County, NY King Ferry Winery installed nesting boxes for American Kestrels. The winery anticipates that the small falcons will deter flocks of songbirds from eating its grapes. The hope is that once they settle in, the predatory birds will likely be better at keeping songbirds away than bird-scare cannons, which are noisy and tend to lose effectiveness over time.

Bonterra Vineyards uses a host of earth-friendly pest management strategies including free-roaming chickens, goats and plants like lavender and olives to establish a “web of natural balance.” According to their site: “Bonterra’s pesticide-free legacy is no surprise. Chief winemaker Robert Blue mastered the wine trade under the guidance of sustainable wine-gurus Paul Dolan (of Parducci) and Dennis Martin at Fetzer Vineyards.”

Burrowing Owl Estate Winery near Oliver, B.C. has more than 100 bluebird boxes and bat nursery boxes to entice insect-eating wildlife to ‘stay awhile and dine in the vineyards.’ The winery name, however, is an homage rather than a sign of a pest management strategy. Proprietors Jim and Midge Wyse chose the winery name when they learned that Burrowing Owls may have lived in the area at one time, but have since become an endangered species. Winery patrons donate $2 for each tasting and the proceeds are given to the Burrowing Owl Conservation Society of BC and to the South Okanagan Rehabilitation Centre for Owls. Who knows, maybe some day the Burrowing Owl will come back and repay the Wyses with some old fashioned pest management work.