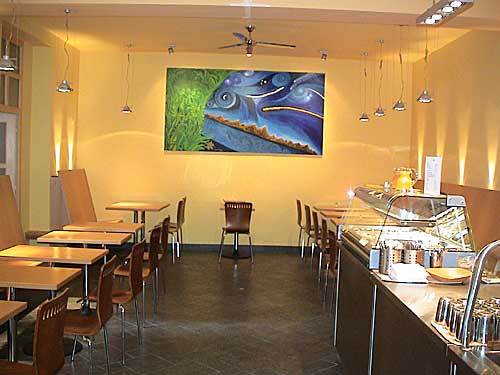 We were still quite full from our meal at the restaurant at the bottom of this post, so we didn’t eat a lot here. And it actually seemed there weren’t a lot of main meal options. But what we did see looked quite good.

Food: The only food we got was a cheesecake. It was completely delicious, in my opinion, but I almost never eat cheesecake because I am strict about not eating eggs and it’s hard to know if a cheesecake has eggs in it or not in most situations where I would have the opportunity. This restaurant was completely egg-free, so it wasn’t a concern. A main ingredient of the cheesecake was poppy seeds, which seem to be a signature food of the Czech (along with fennel). We also had lassis (which we weren’t thrilled with, but determined we don’t really like lassis, in general) and a large, energizing wheatgrass juice.

Atmosphere/setting: It was a pretty small restaurant with a nice homey feel. Very warm atmosphere and nice outdoor seating in a little courtyard was available as well but not when we were there because it had been raining.

Service: The servers were extremely friendly, again, and the service was quite prompt.

This restaurant was out of the main tourist area a bit in a nice little neighborhood that we probably wouldn’t have visited if we weren’t headed here. It was really a nice neighborhood to see and would recommend it even if you don’t want to eat at this restaurant.

Food: The food here was good, but not our favorite. It was Vietnamese, I think, which we like from time to time but doesn’t thrill us. But it was good. Important note, however: IT WAS HOT/SPICY (and we were not warned). Also, I think this restaurant was pure vegan.

Atmosphere/setting: This restaurant had two levels, both were very nicely decorated, cozy, and interesting. There was nice, tranquil music playing. And, again, like the neighborhood around the restaurant.

Service: The owner, who took our order and served us, was extremely friendly and sociable. It was nice to meet him.

I think you can tell that we had a good time and LOVED the food in Prague :D

Any questions? Have you visited Prague and have anything to add?