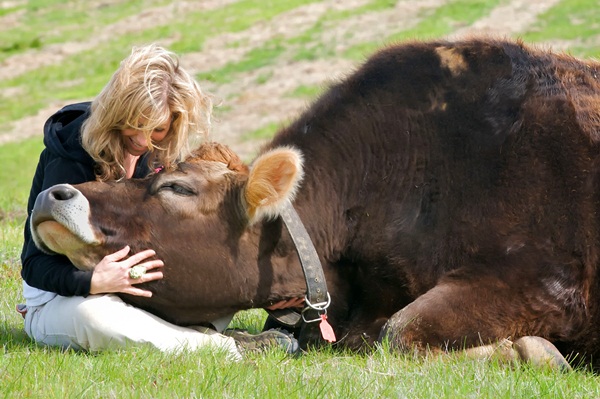 Colleen’s goal in creating the 30-Day Vegan Challenge was one of empowerment:

CPG: The mission and the work I do is quite literally to empower people to make informed food choices, to debunk myths about veganism, to be a voice for animals, and to give people the tools and resources they need to live according to their own values of compassion and wellness.

I think a lot of people want to make a change, but they don’t know how to do it; I think there’s a lot of compelling information out there on ‘why vegan,’ but I don’t think there’s as much on guiding people toward ‘how vegan’ — on how to do it, how to go through the transition period. And so that’s really how I see my work playing a role.

Though veganism itself isn’t difficult, initially changing any entrenched daily habit can be hard.

CPG: Some people have said, “Why do you use the word ‘challenge?’ Because the word challenge means something hard…” Well, not always — it’s not meant to imply that it’s hard being vegan; but it’s meant to imply … that it is different, and it can be challenging: change is just hard for people.

We are creatures of habit, and we tend to resist change. And so having someone who can guide you through that, who’s been there before, who has talked with thousands and thousands of people, and who has seen other people go through the same thing — it just makes it easier, more accessible… you feel less defensive because you realize that you can let go of some things, and that other people have done it before, so there’s some guidance in those areas.

Sometimes it seems like people fall into the trap of thinking veganism itself is difficult, rather than simply the act of changing habits, when they first begin to explore conscious eating. Based on this misperception, some folks feel drawn towards the Pollanesque ‘humane meat‘ neighborhood of the food revolution camp — because it calls for less change, and change is challenging.

It’s always easier to change our perception of our behavior than to make meaningful, actual changes in the behavior itself; but actual change pays off in ways that cognitive dissonance doesn’t.

CPG: Ironically, what happens when you change your behavior long enough… is that your perceptions change…

When you get to the other side [of the 30-day transition period], you’re going to have a foundation now that is solid, that you can stand on, that you can feel confident on, that will then continue to make those new habits second nature. And what’s also happened is that your perceptions have changed; and that’s such a beautiful thing.

And so, becoming vegan… really merges the two, and what that also takes is letting go of these myths and misconceptions — and that’s what the ‘humane’ stuff does, is just say ‘Oh, you just want an easy way? oh, you want to keep doing what you’re doing and not change too much but feel really good about it? Here, do this…”

That’s the easy way out in the sense that you’re not making any changes, you’re just buying some things with different labels on them. But that doesn’t change anything. So yes, it might be ‘harder’ in the sense that you are changing habits, which can be challenging for people; but once you get to the other side you actually find that it’s congruent with how you already think, and how you already feel…

As I’ve written about before — Good News: Eating Well Takes no Will Power! — it’s the changing of longstanding habits that requires effort. Once the new habits are set, they’re just as easy as the old ones — and far more satisfying, when (unlike the old ones) they’re actually consistent with your values!

CPG: … I cover all the nutrition, but I really focus on the underlying stuff that has kept us asleep to our compassion for so long. And that’s where it’s really transformative. So, I talk a lot about why we’ve come to believe that we have to go through the animal to get to the nutrients we need. When people understand it that way, they really internalize it; so it’s not just learning facts, it’s really coming to our own truth.

I think when you start to really internalize the compassion… the word I would use is ‘effortless.’ Because when you have the shift, it’s an awakening… it’s just, like, boom: I don’t want to touch any of those things. So it’s an effortless act; but because we’ve been doing these behaviors for so long, the transition period requires some conscious changes.

The 30-day Vegan Challenge was originally released in book form, but now has been superseded by the multimedia format that Colleen originally envisioned.

CPG: The benefit of the multimedia program is that of course you get written materials… but it just enables me to incorporate and pull in all these other mediums like video and audio — so it’s really, I think, the best of all worlds.

Find the 30-day Vegan Challenge (and other excellent work by Colleen Patrick-Goudreau) here — then update your holiday gift list accordingly!

Audio brought to you by Callburner software, thanks to the excellent technical support of software creator Jeremy Hague. Thank you!