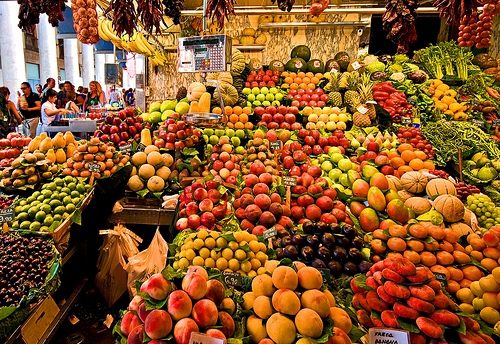 The following are, I think, my 10 favorite foods.. so far. Perhaps I will find some that I like more down the road, but for now I can’t think of anything that surpasses these gems of the Earth.

Thought it would be fun to share these and get feedback from you on your favorites as well. What do you think of these? Would they make your top ten list? Any more you would add?

Avocados are my absolute favorite. I love them plain, made into guacamole, in sandwiches, on rice cakes, or in salad. Writing that sentence literally just made my mouth water… and I just ate!

I love nuts, and couldn’t just choose one or two for this list. I love Brazil nuts, hazelnuts, cashews, almonds, pecans, walnuts, and peanuts. I think they are great alone or mixed with some dried fruit and coconut (and maybe chocolate).

Growing up in Florida, and mostly on the beach or the soccer field, I could not leave watermelon off this list. It is a must in such places. Actually, the reasons my parents originally moved to Florida (before I was born) were for the great watermelons and beautiful beaches. I don’t eat so much of it these days, but watermelon was a staple of my childhood and nothing compares on a hot day.

I love to eat kale cooked with rice or beans, adding it in right at the end or right after I take the food off the stove. Also, I love raw kale in sandwiches, especially with tahini, or in salads. Kale is packed with all sorts of nutrients,.. a post for another day perhaps.

As I’ve written previously, I’m a big fan of apples. I mostly love eating them with some sort of nut butter (i.e. almond or peanut butter), but I think they are great plain as well. For more on the numerous health benefits of apples and some recipes with apples, read “An Apple a Day Keeps the Doctor Away“.

My favorite apples in the States were organic Honeycrisp apples (tons better than the conventional ones) and Pink Lady apples, but I was also a big fan of Galas and Fujis. Here in Poland, I think my favorites are Ligol apples.

I love the simple dish of lentils and rice, but really, lentils with anything is great. I love them with tofu, vegetables, curry, pasta, millet, barley, quinoa, and more.

It is always hard to say, but I think I even prefer garbanzo beans (or chickpeas) over lentils. I eat them with all the same stuff as lentils, but also especially love them with a lot of nutritional yeast and olive oil.

I love sprouts plain to be honest, or in sandwiches or salads. We even mix them in with our cooked food sometimes (especially the crunchy sprout mixes).

This is perhaps my second favorite vegetable. I love peas all alone, even love to eat the frozen ones while they are still frozen. Also like them mixed with carrots, corn, nutritional yeast and olive oil.

This list is in no particular order, but these were the last two foods that I thought of. Unfortunately, I couldn’t decide between them, so I am putting them on here together. Pineapples and kiwis are simply delicious. What more is there to say about these two?