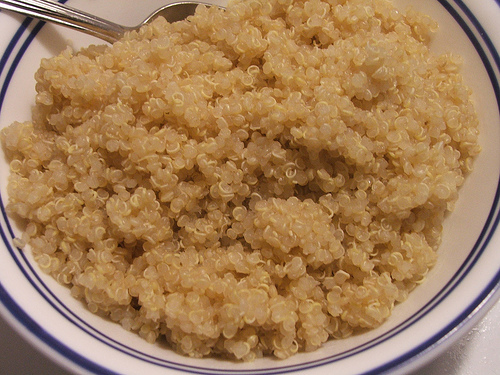 The results are in! An overwhelming majority of readers voted that quinoa was their favorite grain. In fact, so many people voted for quinoa that I can’t even publish a top five list!

Since everyone seems to love quinoa so much, here’s some more information on this ancient grain and some of my favorite quinoa recipes.

Originally from the Andes, quinoa (pronounced “KEEN-wah”) was considered sacred by the Incas. Technically speaking, quinoa is not a true grain even though it’s used like one. It’s actually related to green, leafy vegetables, which is what makes it so healthful. Unlike wheat, rice, or other grains, quinoa is a complete protein source, which is why it’s often referred to as “the supergrain.”

Because quinoa is higher in protein than any other grain and gluten-free, it’s the perfect grain for people on vegan, low-carb, or wheat-free diets. It’s also quick-cooking, making it a convenient option for weeknight meals.

Quinoa has a mild nutty flavor with a slightly crunchy, delicate, and fluffy texture. The small, round size of the individual grains makes it a great textural substitute for ground meat in dishes like chili and casseroles.

You can find quinoa in larger grocery chains and health food stores, or you can order it on the web. It comes in white, red, and black varieties. Although quinoa is most commonly sold as whole grains, you can also find quinoa flakes, which can be treated like rolled oats. Quinoa flakes are perfect for gluten-free “oatmeal” and granola.

It’s best to rinse quinoa in a fine-mesh sieve or cheese cloth before cooking it. Rinsing helps remove the bitter coating on the outside of the grain known as saponin. Although most varieties of packaged quinoa have been pre-rinsed, I always rinse quinoa anyway, especially when I purchase it from a bulk bin.

You can cook quinoa just like rice, using a two-to-one ratio of water to grain. Bring the water and the grain to a boil, cover, and simmer for 14-18 minutes. You can also use a rice cooker to prepare quinoa. Just use the same cooking cycle and amount of water that you would use for white rice.

Although quinoa is delicious enough to eat plain, it’s even better dressed up a bit. Here are some of favorite vegetarian and vegan recipes:

Image courtesy of Autumn Sweater via a Creative Commons license.