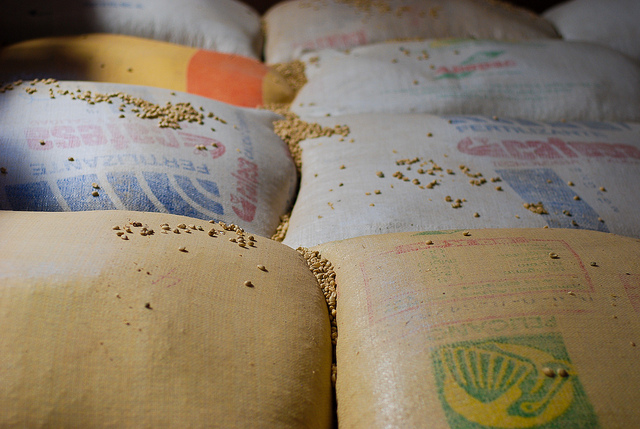 According to a new report, climate change threatens coffee production. Not just at some far-off date in the future. This is happening now.

Let’s face it: The world runs on coffee. If you don’t believe us, take a look at the numbers:

Coffee. Nectar of the gods. And Bill Murray. #ThursdayThoughts. pic.twitter.com/FLi988j6zo

But according to a new report released by The Climate Institute (an Australian think tank), climate change is brewing up a storm for your cup of joe (and the people who depend on it for their livelihood). Say it isn’t so. Here are three facts every java junkie needs to know:

“Without strong action to reduce emissions, climate change is projected to cut the global area suitable for coffee production by as much as 50 percent by 2050.”

There are two main types of coffee that supply the world’s collective caffeine drip: Arabica and Robusta. Arabica accounts for about 70 percent of coffee grown around the world, whereas Robusta is a lower-grade crop usually used to create instant coffee.

Both types are already feeling the impacts of climate change, but it’s falling particularly hard on Arabica coffee (which is usually found in tropical highlands, and needs relatively cool temperatures and plenty of rainfall year-round). Droughts, pests, and temperature rise linked to climate change have already destroyed huge swaths of coffee crops in many parts of the world during the last few decades. In Tanzania, for example, where 2.4 million people depend on coffee for a living, yields have declined by half since the 1960s.

“Over 120 million people in more than 70 countries rely on the coffee value chain for their livelihoods.”

We all know coffee is a way of life, but for millions of people around the world coffee really isa way of life. Of the world’s 120 million people, there are 25 million coffee farmers who rely on the crop, and between 80 and 90 percent are small farmers. Coffee is also the second-most valuable commodity exported by developing nations.

As with most climate impacts, the world’s most vulnerable communities are expected to be hit hardest. This is expected to negatively impact the physical and mental health of coffee communities, ultimately pushing many producers out of the industry.

The world’s biggest coffee companies know we have to take climate action.

“Climate change can have a significant adverse effect in the short term. It’s no longer about the future; it’s the present.” – Mario Cerutti, Green Coffee and Corporate Relations Partner (Lavazza)

Industry giants like Starbucks and Lavazza are well-aware of the current and potential impacts of climate change on their bottom line. But businesses aren’t the only ones that can take action on climate change – the average Joe can help save the cup of Joe.

Looking for a way to make a difference? If you’re in the United States, one of the most important – and easiest – things you can do is to register to vote. Expanding clean energy. Creating more green jobs. Ensuring a healthy, sustainable future for all of us. These are things we can all get behind and will mean we’re all waking up to a hot cup of coffee for years and years to come. That’s why we need to #RockTheVote this November.

Republished with permission from The Climate Reality Project; Creative Commons photo by Everjean.