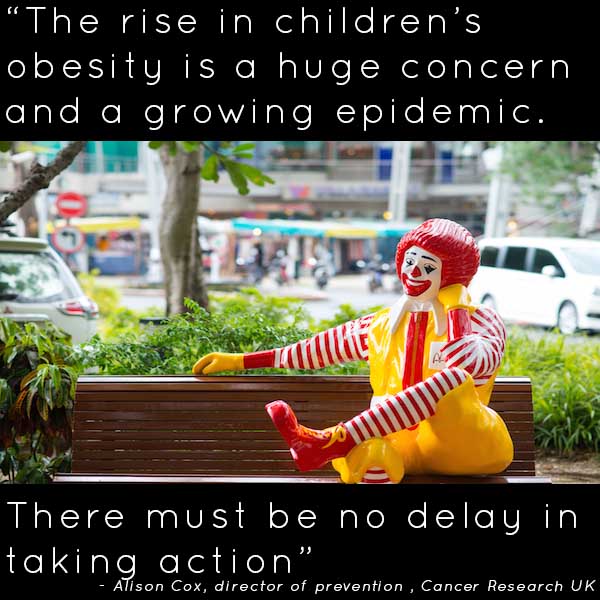 The study looked at how junk food advertising can influence children’s eating habits and food choices. Researchers talked to children aged between 8 and 12 years old at six schools. Each group was shown two TV adverts for junk food, followed by a discussion.

Many of the children said they liked watching funny and engaging adverts and could recall advertising theme tunes. They also said they saw adverts during family TV time, saying they watched TV from ‘around about seven o’clock till eight or nine’.

And the researchers believe that by using celebrities, bright colours, and funny voices, advertisements are able to attract children and influence their eating habits.

“You might be eating a piece of fruit, you might see the advert, and you might just throw it in the bin and ask your mum for money and leg it to the shop,” said a boy, year 6, from Northamptonshire during the discussion.

A girl in primary 5 from North Lanarkshire, after watching a TV commercial for sweets, said: “It makes you feel as if you’re happy and excited and it feels like you want to try it because the guy’s dancing in it because he’s eaten it and it tastes good.”

Most children said they had asked their parents for things they had seen on TV, particularly new junk food products, flavours or eye catching pack designs.

“I asked my mum if I could have it and she said no and I was annoyed and I kept trying and she finally said yes and I got to go to the shops to get it,” explained a girl in primary 5, from Edinburgh.

More than one in five children in England are overweight or obese before they start primary school. By the time they leave, this increases to one in three.

Recent polling shows that 74 per cent of the UK public back a ban on advertising junk food on TV before 9pm.

Dr Jyotsna Vohra, head of the Policy Research Centre for Cancer Prevention at Cancer Research UK, said: “It’s worrying to hear that children associate junk food with having a better time and it’s clear from the discussions that advertising can influence how they eat.

“Most kids said that adverts made them feel hungry and in many cases it had a direct effect, with some children more likely to ‘plead’, ‘nag’ or ‘beg’ their parents after seeing an advert.

“The rise in children’s obesity is a huge concern and a growing epidemic. There must be no delay in taking action. We know that obese children are around five times more likely to be obese adults, and obese adults are more likely to develop cancer. {Ofcom, 2007 #110}This is why we need regulations to stop junk food advertising on TV before the 9pm watershed to give children a better chance of a healthy life.”