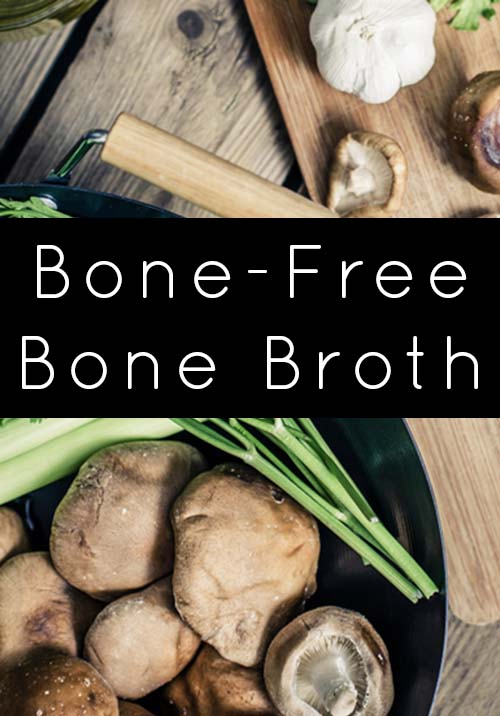 Vegans love to veganize things. Whether it’s cheese, bacon, or some other animal product-laden food, chances are someone is working on an awesome vegan version. Now, you can add bone broth to the list of foods with a vegan counterpart.

Whether you buy into the magical powers of bone broth or feel like it’s more health myth than health food, chances are you know that bone broth is super hip right now. What’s not super hip is animal cruelty, and that’s why folks in the vegan community have been tinkering with vegan bone broth recipes that give similar benefits.

Bone broth enthusiasts point to collagen as the ingredient that lends it much of its healing power. Luckily, you don’t have to boil animal bones all day to make a collagen-rich broth. Instead of bones, vegan bone broth relies on mushrooms, veggies, and sea vegetables for its collagen.

Even better? You don’t have to cook vegan bone broth overnight to reap the benefits of the ingredients. Instead, it takes an hour and change to prep and simmer. The shorter cooking time is more than just convenient. It’s better for the planet, because you’re using less energy during a shorter cooking time.. Plus, you don’t have to worry that you’re going to burn your house down by leaving the stove on overnight.

Why call it bone broth if it has no bones in it? It’s all about advocacy. Vegans are passionate about protecting animals, and part of that is showing that there are delicious vegan alternatives to animal-based products. Labeling these recipes vegan bone broth instead of mushroom broth or collagen broth is sort of a shorthand. It’s a two-word way of expressing, “Broth that has the same benefits as bone broth without having to harm animals.” Vegan bone broth gets that point across a lot more efficiently.

There are lots of vegan bone broth recipes out there, so you can really pick and choose your favorite. Jill Ettinger shared one over at Organic Authority, or you can grab the recipe from New York’s Splendid Spoon at StyleCaster.