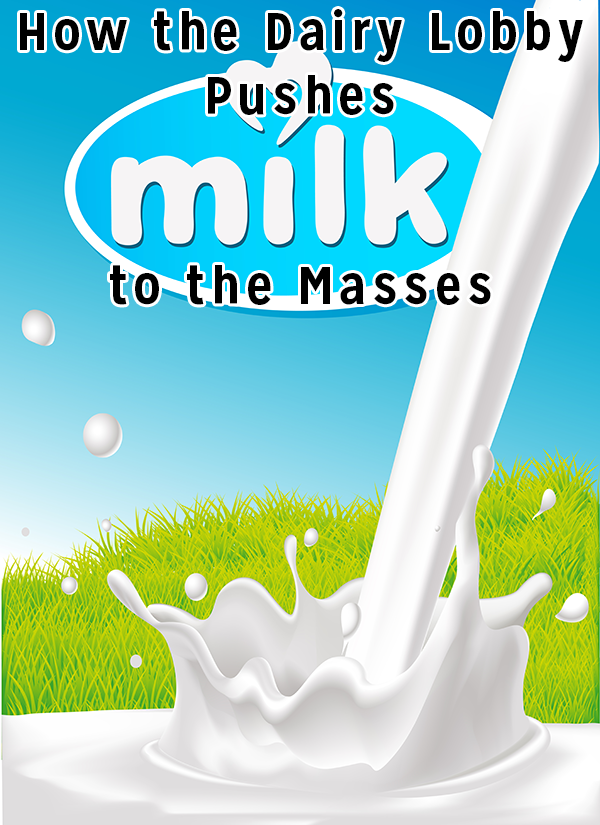 Does milk do a body good? Let’s take a look at how the dairy lobby markets its product and how milk really impacts our health.

A few weeks ago Mother Jones published an incredible, in-depth article about the dairy industry and the impacts of dairy on our collective health. Articles like this always catch my interest. Though Mother Jones isn’t totally mainstream, seeing high-quality publications take on this issue is inspiring. It signals the beginning of a larger shift in consciousness about long-held assumptions about our food system.

One of the first things the article mentions informs the rest of the article (and is something we feel pretty strongly about here on EDB):

“A growing body of research has found that, for grown-ups, consuming too much dairy can actually be harmful.”

In the article, Josh Harkinson delves deeply into the history of dairy consumption and how we’ve come to believe that milk is an important part of our diet mostly due to the savvy marketing techniques of the dairy industry itself. The dairy industry– a phrase that sounds like a code word for some conspiracy theory craziness– is really a thing. In the US, the $36 billion dairy industry has more sway than you’d like to think within the halls of the US Department of Agriculture and the Department of Health and Human Services.

Despite the fact that many of us wouldn’t know which food goes where on the new MyPlate.gov guidelines, Harkinson says they are actually quite influential because they determine nutrition campaigns, decide guidelines for food assistance programs like WIC and SNAP. But more importantly, they guide the advertising for select foods, like the Kelley O’Hara chocolate milk ads that I wrote about a few weeks ago. These consumer-funded and corporate-backed programs are the foundation of USDA Checkoff programs, which support marketing campaigns that most Americans can easily recognize: Got Milk?; Beef- It’s What’s for Dinner; The Incredible Edible Egg; and Pork- The Other White Meat. But these programs are also behind restaurant campaigns to increase cheese consumption, like stuffed crust pizza.

These ad campaigns are meant to increase the consumption of these foods– but simultaneously the USDA is encouraging us to change our dietary patterns to avoid these foods for health issues. I think it’s a pretty messed up system, and so does Harkinson.

In the MJ post, Harkinson details how exactly milk came to be seen as a health food during the depression when dairy farmers received their first federal subsidies. In the 1980s federal nutrition programs began to include more dairy foods on the agenda to appease food lobbyists, and this program continues to this day to the tune of about $4.5 billion.

The problem is that while milk and cheese do provide some minerals, the nutrition in milk (specifically calcium) is not nearly as bioavailable as that found in plant foods like leafy greens and sea vegetables (seaweeds).

In fact, dairy-based calcium can actually be detrimental. Harkinson explains that long-term, large-scale studies have found that it found that, “women who drank two and a half or more glasses of milk a day had a higher fracture risk than their counterparts who drank less than one glass a day [and] that men who drank two or more glasses of milk a day were almost twice as likely to develop advanced prostate cancer as those who drank no milk. ”

Dairy is linked to higher rates of cancer, diabetes, osteoporosis and obesity. Not as scary, but just as important to note is that dairy foods are also linked to slower athletic performance and inflammation, which is linked to other health concerns like heart disease. And as if the health information wasn’t enough, there is also an abundance of hormones and pus in milk.