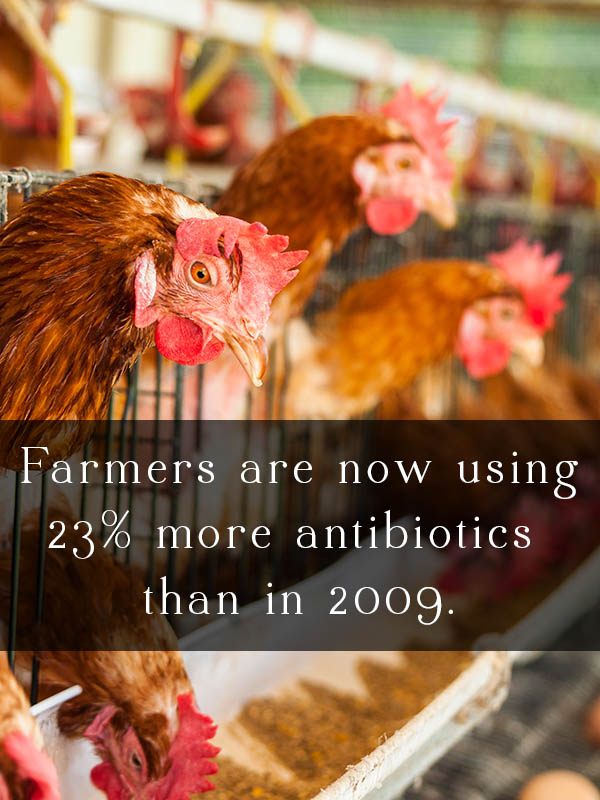 Thanks to consumer pressure and year-old voluntary FDA guidelines, heavy-hitters in the animal agriculture industry have been promising to reduce their use of animal antibiotics. The FDA numbers on antibiotic sales to farms, however, indicate that those promises may have been just lip service.

Why Everyone Should Care About Animal Antibiotics

Whether you eat meat or not, animal antibiotic abuse is a serious public health concern. Many of these antibiotics are the same ones doctors prescribe to humans for infections. Farmers administer these antibiotics to their livestock to make them get bigger faster, and they’re breeding superbugs that don’t respond to available treatments in the process.

Antibiotic resistance is not a future problem that we’re trying to prevent. It’s a current public health crisis that we need to mitigate now, according to the World Health Organization.

If you do eat meat, the problem is compounded when antibiotic-treated meat hits your plate. Those antibiotics can remain in the meat, meaning you’re getting a low dose of antibiotics when you eat treated meat. This further builds antibiotic resistance.

Animal Antibiotics on the Rise

Antibiotics abuse on American farms isn’t an exception. It’s the rule in large-scale animal agriculture. Antibiotic abuse on farms is illegal in the E.U., but here in the States, policy to limit animal antibiotics is weak at best. According to Consumer Reports, about 80% of the antibiotics sold in the U.S. go to animals, not to humans.

NPR points out that many of the companies promising to cut animal antibiotics set 2015 goals, so this FDA data may not reflect this year’s sales. National Geographic’s Maryn McKenna explains why the 2014 numbers are still worrisome, however. She says, “It’s especially not good because the numbers just released cover the year 2014—the first year in a voluntary three-year period, set by the Food and Drug Administration, during which use of farm antibiotics is supposed to be reduced. If agriculture and the veterinary pharma industry didn’t manage reductions in Year 1, they have a hard task ahead of them to create significant change in Years 2 and 3.” I encourage you to read her whole piece on the new FDA data. It’s incredibly eye-opening.

Animal Antibiotics: What You Can Do

It’s time for the FDA to issue a strong rule banning the routine use of antibiotics in healthy food animals, a practice that contributes to the spread of antibiotic-resistant bacteria that infect more than 2 million Americans each year. California just approved the nation’s toughest law to end this bad practice, and I strongly urge you to do the same.

Even the policy changes Consumers Union is talking about won’t completely stop farm antibiotic use. Animals on factory farms – even “cage free” or “humane” ones – frequently get sick, and those animals would still require antibiotics. This is because livestock live in unsanitary conditions that breed disease.

There’s one thing that industrial agriculture advocates get right. Factory farming is necessary to sustain our current levels of meat eating. We could not produce enough meat to feed everyone with the land that’s available. We can, however, grow enough plants to feed everyone now.

If we truly want to stop farm antibiotic abuse, we need to not just change policy but change what’s on our plates. Eating less meat or no meat at all is the ultimate solution to our animal antibiotics problem.