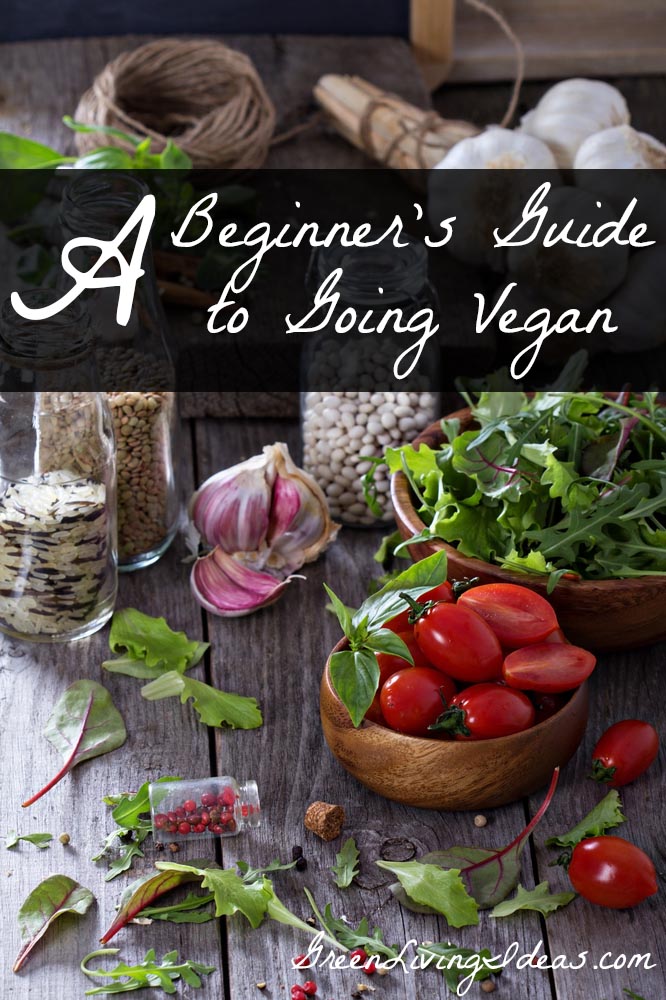 Over at Green Living Ideas, I just launched a mini-series on how to ditch animal products. As you probably know, veganism is about more than food. Eating vegan is a great first step, but vegans also don’t want materials made from animals in our closets, bedrooms, or medicine cabinets. Not all of the series is a fit for this space, but the first installment is all about how to transition from an omnivorous diet to eating delicious vegan food. I couldn’t resist sharing it here!

Going vegan is not a crash diet or cleanse. Veganism is a lifestyle choice that’s all about protecting animals by avoiding animal products. Eating vegan food is definitely a great first step, and that’s what we’re going to focus on today. In the coming weeks, I have more installations planned about kicking animal-based beauty products to the curb, going vegan in the bedroom, and veganizing your wardrobe, so stay tuned at Green Living Ideas!

Below, you’ll find resources and recipes to help you transition from even the most meat-heavy diet to a vegan one.

How to be Vegan: Transitioning Your Diet

According to environmentalist Yvonne-Marie Valladares, one of the biggest mistakes that new vegans make is trying to go whole hog (whole not-hog?) from the jump. This is overwhelming and can make a vegan lifestyle seem impossible. She recommends slowly cutting back on animal products at your own pace.

Maybe you start with cutting out red meat or with eating vegan one or two days a week. A slow transition can help you adjust to this new way of eating and help your new vegan lifestyle stick!

Before we get into how to be vegan, there are some myths about veganism that need to be dispelled:

1. Vegans can eat gluten. Lots of gluten! You can be a gluten free vegan, but gluten comes from plants, so it is a vegan food. In fact, one of my favorite vegan foods – Field Roast Sausage – seitan, a dough made from vital wheat gluten. Pass the bread, please!

2. Vegans can eat sugar! This one is a little bit tricky. Many commercial sugars – at least here in the U.S. – are processed using bone char. Florida Crystals and Sugar in the Raw are pretty common brands of vegan sugar. Whole Foods 365 also has an affordable vegan sugar. As long as the sugar isn’t processed using animal bones, it’s vegan.

3. Vegans can drink booze! This is another preference thing. Some vegans, like some omnivores, don’t drink. Some do. The only trick here is finding vegan booze. Most liquors are vegan, but beer, wine, and liquors sometimes aren’t. Your best bet is to look things up! My go-to for this is a site called Barnivore. I also like the Vegaholic app if I don’t have access to the Internet, though it doesn’t seem to have as big a database as the Barnivore site does.

4. Vegans can drink coffee! This vegan is on her second cup – with plenty of soy milk – as she types this. The only exception to this rule is that coffee that comes from a goat’s behind. Vegans don’t drink that kind of coffee.

5. Vegans can eat chocolate! Chocolate comes from plants, and many good-quality dark chocolates are just made from cocoa powder, cocoa butter, and sugar. Vegan! Milk chocolate is not vegan, and dark chocolate that contains milkfat, butterfat, or butter is not vegan. You just need to read the label.

Figuring out if something is vegan comes down to one question: did this come from an animal? If the answer is no, then it’s vegan!

Tanya has written an excellent cooking primer for new vegans. There are additional resources below, but if you read one more thing today about how to be vegan, it should be this! We’ve got a lot more info on how to go vegan below!

Here’s the short list of common foods that vegans do not eat:

It’s also a good idea to look at product labels for hidden animal ingredients, especially when it comes to processed food.

If you’re used to eating the Standard American Diet, giving up these foods can seem almost impossible, but stay with me! Remember what Valladares said: you can do this gradually. Focus on one animal food at a time, and go at your own pace. Every change you make is good for animals.

It’s important to remember that going vegan isn’t about cutting things out of your diet. If you just cut out animal products, you would die. You need to replace those calories and nutrients with plant-based alternatives. Here are some resources to help you!

If you’re worried about iron, eat more of these iron-rich vegan foods.

A large portion of Americans, not just vegans, need more calcium in our diets, and dairy is actually a terrible source of calcium for bone health. Leafy greens are excellent for delivering calcium along with magnesium, which is another critical nutrient for bone health.

Vitamin B12 is the one vitamin that you can’t get enough of from plant-based foods. Seaweeds and nutritional yeast are two exceptions, though I don’t mess around with B12. Vegan registered dietician Ginny Messina, R.D. recommends that vegans take a B12 supplement.

Replacing eggs is a lot easier than you’d think! Try a tofu scramble instead of scrambled eggs for breakfast. Instead of egg in your next quiche, check out Jill’s vegan quiche recipe. It will change your life! Replacing eggs in baking can be a bit trickier, but you don’t need expensive egg replacers. For cookies, brownies, breads etc, replace your eggs with the liquid from canned beans (no, really!). You can save the beans for another meal.

Replacing dairy is easy, too! Make your own coconut milk yogurt.Pick up non-dairy sour cream or cream cheese at the store, or make your own cream cheese or homemade sour cream. Replace butter with non-hydrogenated vegan margarine, like Earth Balance, or with coconut oil. A note about using coconut oil: this works well in most recipes, but for something very butter-intensive like shortbread, coconut oil has failed me in the past. For very buttery goods, I’d definitely go with vegan margarine instead.

Giving up cheese can be hard for a lot of people. Quitting cheese was tougher for me than quitting smoking! Look for fermented cashew cheeses. These are whole food, plant-based cheeses made from nuts, and they give dairy cheese a run for its money. I’m partial to one made locally here in Atlanta called Pure Abundance. Miyoko’s Creamery is another great source for vegan cheese, and they deliver! You can also make your own vegan cheese at home. Try my cashew queso, Andrea’s Cheezy Sauce, or Andrea’s Caramel Apple Cheesecake for a homemade, creamy fix.

Once you get the hang of reading labels and making vegan substitutions, eating vegan will start to feel like second nature. I’ve been vegan for nine years, and at this point, scanning products for animal ingredients and veganizing recipes is second nature. It’s almost like learning a language. With practice, you’ll eventually be able to translate almost any Standard American Diet recipe into a vegan one.