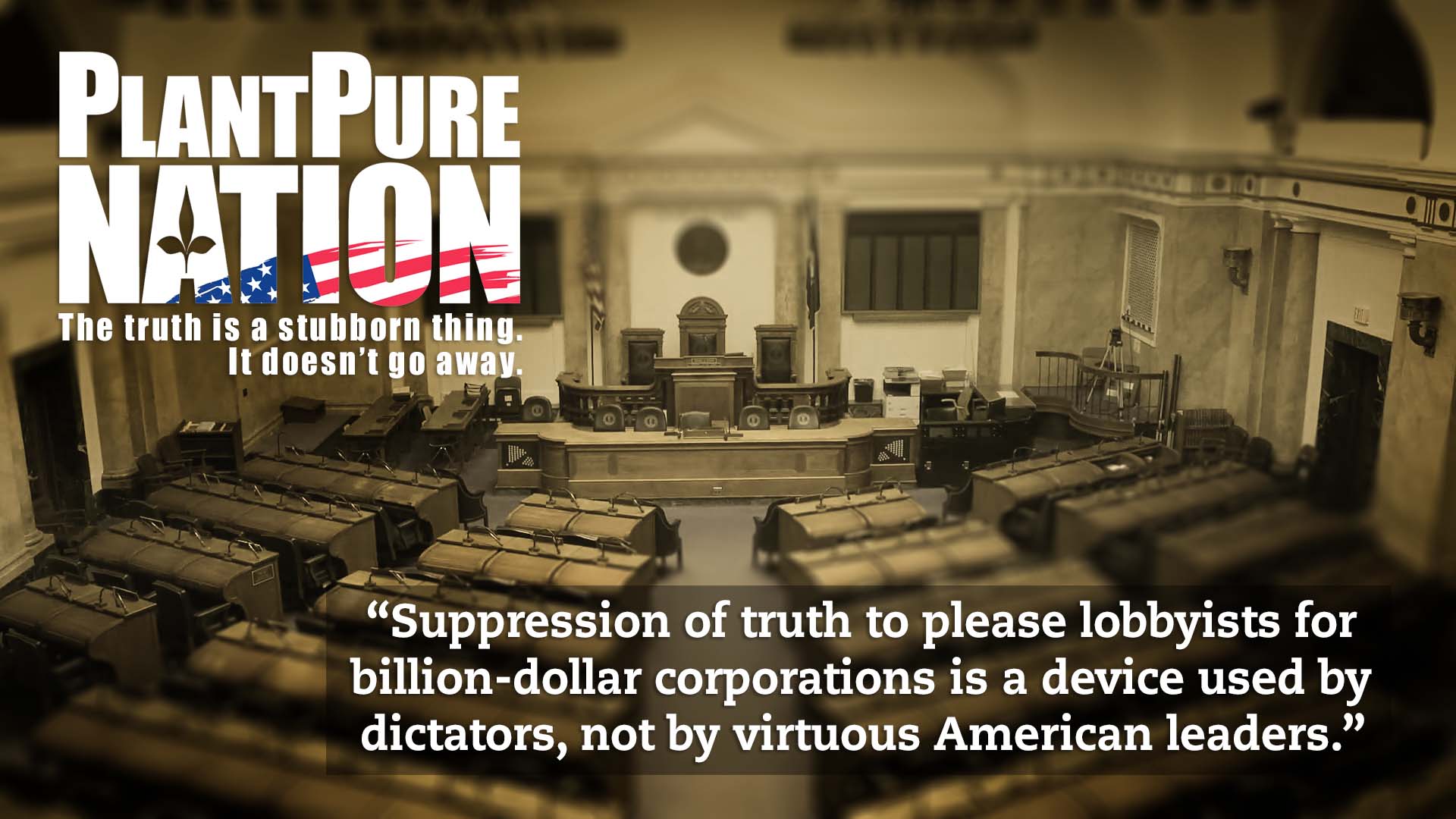 In “PlantPure Nation,” the main protagonist is Nelson Campbell, son of nutritional scientist and bestselling author Dr. T. Colin Campbell. Nelson teams up with Kentucky State Representative Tom Riner to propose legislation related to the health benefits of a plant-based diet. After agribusiness lobbyists effectively block legislation to enact a pilot program to document these health benefits, Nelson decides to initiate a pilot program in his small hometown of Mebane, North Carolina. In the meantime, Representative Riner continues his efforts in support of a watered-down bill recognizing the well-established positive effects of a plant-based diet.

The film documents the dramatic improvements in biometric test results that “jump-start” participants in Mebane have in just 10 days of plant-based eating, and the surprisingly favorable reception that the prepared, healthy plant-based meals receive from people used to a standard American diet (including southern comfort foods). In this respect, it reinforces the message portrayed so convincingly in “Forks Over Knives,” providing further evidence of the overwhelming health benefits of a whole foods, plant-based diet.

In addition, the movie sheds light on the powerful reach of special interest lobbyists and the extreme challenge of getting the plant-based message acknowledged by the powers that be and communicated to the public at large. It also provides encouragement in the form of Representative Tom Riner, who worked tirelessly in support of the pro plant-based legislation, even giving out hundreds of copies of “The China Study” to help inform his colleagues.

I think “PlantPure Nation” was well done, and I greatly admire the conviction, heart-felt concern for the well-being of the American public, and tenacity of the filmmakers, and Nelson Campbell in particular. I have few criticisms of the movie; however, one is that it got off to a fairly slow start. While some of the slow beginnings included touching family tributes, including an interview with Nelson’s mother, Karen Campbell, some viewers might lose interest before the movie picks up. Another aspect I found less than ideal was the twangy, country-ish music, which is purely a matter of taste.

In the jump-start programs conducted in Mebane, which started small and grew over time to include larger numbers of participants, the food was prepared and distributed to the participants. While this makes sense for the purposes of doing before and after testing, it leaves out the important potential obstacle of food shopping and preparation that is faced by most people who adopt a plant-based diet. While I am certain that the program included education on this for the participants, people watching the movie may feel they have an easy out from trying it themselves, as they may think, “of course I could do it if someone else bought and prepared all my food.”

One last complaint I have is that I wish the point had been made clear that weight problems and ill effects from a standard American diet don’t always go hand in hand. While the obesity epidemic is real, and problems like cardiovascular disease and diabetes often are associated with obesity, thin people also can suffer from health problems related to unhealthy diets. As the mother of a tall, slender, 20-year-old (who saw the film with us and is not currently a plant-based eater, except when he visits home), I have a special interest in this fact and would hate for my son to think he has no need for concern about what he eats because he’s not overweight.