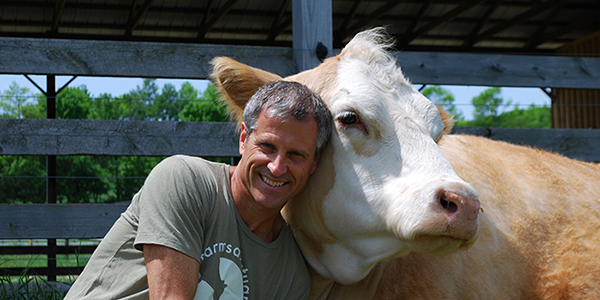 Ed. Note: We are thrilled to share this interview with Gene Baur! Chic Vegan’s Dianne Wenz sat down with Baur to talk about his personal journey to veganism. And, of course, to talk about FOOD!

Gene Baur, president and co-founder of Farm Sanctuary, has been hailed as “the conscience of the food movement” by Time magazine. Since the mid-1980s, Gene has traveled extensively, campaigning to raise awareness about the abuses of industrialized factory farming and our system of cheap food production. His first book, Farm Sanctuary: Changing Hearts and Minds About Animals and Food, a national best seller, is a thought-provoking investigation of the ethical questions surrounding beef, poultry, pork, milk, and egg production.

Gene’s new book Living the Farm Sanctuary Life is a definitive vegan and animal-friendly lifestyle guide in which he and Gene Stone, author of Forks Over Knives, explore the deeply transformative experience of visiting the sanctuary and its profound effects on people’s lives.

Gene Baur: I decided to become vegan because I didn’t want to support the injustice, abuse and environmental harms caused by animal agriculture. It was a process, which took several years and started in high school when I learned about the suffering of calves raised for veal. I also became aware of the disconcerting fact that I was eating animals after recognizing the body of a full chicken, on his or her back on a serving plate, which led me to stop eating meat for a while. I finally went vegan in 1985 after learning about the inefficiency of animal farming and recognizing that humans could live well without consuming animal products.

CV: You’ve been vegan for many years. What changes have you noticed in the popularity of veganism and the way vegans are perceived in different parts of the country?

GB: In the 1980s, there was less awareness or understanding of the vegan lifestyle, and it was more difficult to find vegan food. Today, celebrities and public figures are identifying themselves as vegans, and the ethical and health implications of exploiting animals for food are being addressed by academics, professionals and thought leaders. Vegan businesses are growing, and vegan products are more available now than ever.

CV: Can you tell us a little about what led you to found Farm Sanctuary in 1986, when people weren’t too concerned about the fate of animals being raised for food?

GB: Farm Sanctuary was founded in1986 to expose and confront the abuses of factory farming, to educate consumers about the importance of making more mindful food choices, and to present a new model for how humans can live compassionately with other animals. The abuses of factory farming are outside the bounds of acceptable conduct in our society, but these have been hidden from public view. That is changing, and with increasing awareness, change is inevitable. I believe that consumers will make kinder choices when given the opportunity.

CV: Congratulations on your new book Living the Farm Sanctuary Life. What inspired you to write it?

GB: Living the Farm Sanctuary Life builds on my first book and other works that have done a good job of exposing problems with our current food system. The new book provides solutions and describes how living according to Farm Sanctuary tenets can improve our lives and the lives of others (including nonhuman animals). It gives “how to” advice for people interested in living healthy compassionate lives and shows that vegan food is tasty and satisfying. I’m very grateful to have more than 100 vegan recipes from our nation’s top chefs and cookbook authors.

CV: Animal rights activists see a lot of gruesome images. What advice do you have for keeping sane after witnessing so much horror?

GB: Seeing the egregious suffering humans inflict on other animals is deeply distressing, and the images of animals in factory farms and slaughterhouses can haunt us. We need to be aware of these horrors, but should not dwell in them or to let them dominate our lives. It’s important to focus on the positive things we can do to make a difference rather than to feel depressed and defeated. We need to celebrate steps, no matter how small, in the direction of compassionate vegan living. Small steps, like a person eating less meat, often lead to more steps, which build momentum toward major changes.

CV: Do you have any tips for someone who wants to go vegan but is afraid of such a big change?

GB: Try Meatless Mondays or try replacing one animal based meal a day with one that is vegan. Instead of cows’ milk, use plant based milks (almond, soy, coconut, etc.) that are now widely available, and substitute plant based meats for animal based meats. In recipes like spaghetti and meatballs, you can use veggie meatballs, or just leave the meat out, or replace it with vegetables like broccoli.

GB: I’ve had so many amazing vegan meals, out at restaurants and with friends at home, so it’s impossible to name just one. A great meal involves more than just great food. It is also influenced by the social and physical setting. Having dinner with friends overlooking an ocean sunset, for example, really adds to the experience.

GB: I can’t think of any one vegan product that I absolutely need. I use and enjoy a variety of vegan products.

CV: What do you think the future holds for the animals and the world of vegan living?

GB: It is an exciting time for the animal rights and vegan movement. With a growing understanding of the cognitive and emotional lives of other animals, we are coming to address fundamental questions about our relationships with them. We’re experiencing a convergence of interests and concerns that are building momentum for a plant based food system. We’re in the midst of a burgeoning food movement, with growing investments in vegan businesses and regenerative agriculture, and I’m very optimistic about the future.

Republished with permission from ChicVegan.com.