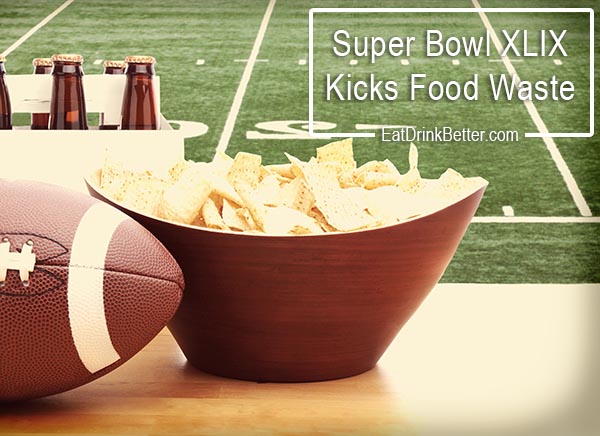 When you think “Super Bowl,” you probably picture the usual sports things, right? When you think about Super Bowl food, maybe nachos, fries, and wings come to mind? But what happens to all of those Super Bowl snacks and the containers they come in?

The city of Phoenix is using the Super Bowl to launch a city-wide effort to reduce food waste. They’re focusing on composting and on using fewer single-use food containers. Jeff McIntire-Strasburg at our sister site Sustainablog wrote about the program.

I’ve always thought that using the world of sports to highlight sustainability made a lot of sense: not only do these businesses stand to benefit greatly from lightening their footprint, but they’ve also got huge captive audiences for the message. Unfortunately, many of these efforts haven’t gone nearly far enough: sure, “Green Day” at the ball park will get a lot of recyclables into the right cans, but without a sustained effort, this becomes more of a gimmick than a genuine, sustainable effort.

I was prepared for a similar reaction when I started to read about the Reduced Waste Challenge scheduled for this weekend’s Super Bowl in Phoenix. Sporting events are fantastic venues for highlighting the issue of food waste… but, again, I was prepared to read about a one-shot effort at food waste recycling. That’s not what happening in Phoenix, according to EPA Regional Administrator Jared Blumenfeld. Rather, this effort at Super Bowl Central, a 12-block area in downtown Phoenix that will play host to all sorts of festivities this weekend, is a kickoff (if you will) to more conscious food waste collection efforts in the city. Among the practices being encouraged by the Challenge:

+ Using not only recyclable items (which is what you tend to see with these efforts), but also reusable ones. So, no styrofoam or paper cups or plates, but rather plastic items that a fan can take home with them to remember the event every time they use it. Plastic may not be ideal, but it’s definitely better than one-and-done throwaway options.

+ Composting food scraps will also play a substantive role in both Super Bowl activities and the city’s efforts to better manage food waste. According to Blumenfeld, “For the first time, the Phoenix Public Works Department will use a three-bin system to collect materials for composting (food, food-soiled paper and yard waste to be turned into compost) and for recycling.”

It’s good to see Phoenix and its Super Bowl partners focusing on reduction and reuse efforts: too many green events in the sporting and entertainment worlds have focused almost exclusively on recycling. We’re huge fans of the third R, of course… but the first two precede it for a reason.

Know of other sporting events or organizations moving in more substantive directions with their green efforts? Do share…