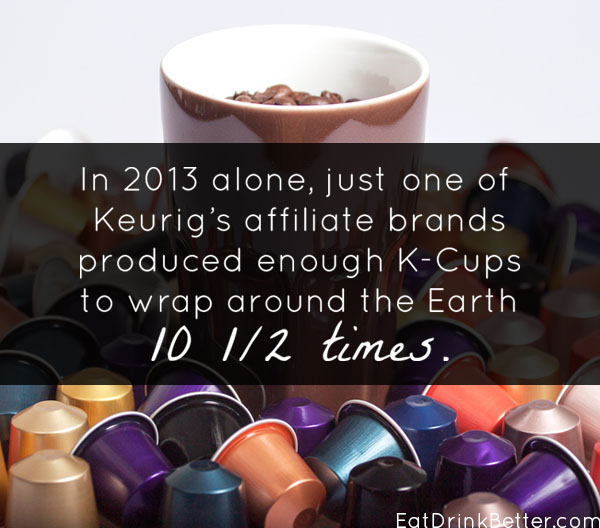 The video above is for a petition demanding that Keurig make K-Cups fully recyclable now, not by 2020 as they pledged. But K-Cup recycling isn’t the solution to K-Cup waste. Learn why and try these alternatives to wasteful, single-use plastic.

Jeff McIntire-Strasburg over at Sustainablog originally shared this video along with details on the fight about K-Cup recycling. In a nutshell, here’s the deal. Right now, 5 percent of K-Cups are recyclable. Keurig has pledged that by 2020 all of their K-Cups will be recyclable. I definitely suggest checking out Jeff’s piece for more on how companies are trying to make disposable K-Cups less of a scourge on the environment.

But here’s the thing.

There is no such thing as an eco-friendly disposable K-Cup. Any time that you use something once and toss it, you are doing something inherently not eco-friendly. Even if someday Keurig can tout 100 percent K-Cup recycling, those cups are still a shameful waste of resources. The problem is that plastic recycling is not 100 percent efficient. This is something I’ve written about before when it comes to K-Cups and other single-use plastic. Calling it plastic recycling is somewhat misleading. What we are really doing is called downcycling. When you “recycle” plastic K-Cups, the company doesn’t clean them out and reuse them. They don’t melt them down and make new K-Cups. Every time plastic is recycled, the quality of the resulting plastic is lower.

Each trip to the recycle center is another step on that plastic’s inevitable trip to the landfill. K-Cup recycling doesn’t end K-Cup waste. It just slows it down a little bit, so we can feel better about it.

That K-Cup monster in the video may hyperbole, but what it doesn’t overstate is the sheer number of K-Cups littering landfills.

In a 2010 article about K-Cups and K-Cup recycling, the New York Times called single-serve coffee pods “a conundrum.” I’m not sure what the conundrum is. That article is over four years old, though. Now, K-Cups hold a huge percentage of the coffee market. Twenty percent of adults now use K-Cups. It’s the second most popular coffee-making method.

So here’s the other thing.

I get wanting to brew a single cup of coffee. As a work-at-home mom to a toddler, I can sympathize with needing a cup of coffee to get through the afternoon and not wanting to put on a whole pot. K-Cups are convenient, I totally get it. Now that we live in a K-Cup world, why would we go back?

The good news is, we don’t have to! The bad news is only for companies like Keurig who won’t make billions of dollars on these alternatives, because we only have to buy them once. Did you know that you can get a reusable filter for your Keurig machine? This thing is freaking adorable. It’s a tiny, metal coffee filter. You just scoop your favorite grounds into the precious little filter, then use it just like you would a disposable K-Cup.

Adding that scoop of coffee takes about as long as wrestling off the stupid pull tab on the disposable ones.

Making French Press coffee isn’t quite as convenient as using a Keurig, I’ll be honest. You have to find about six to eight minutes to brew a cup. If you want to get really scientific about it, Serious Eats has a good tutorial (scroll down for a step-by-step). If you want a quick-and-dirty, read on.

1. Get your beans pre-ground. This saves time. You want a coarse grind, but I have to tell you that if you’re used to K-Cup coffee it doesn’t really matter much.

2. Boil your water. Don’t worry about the temperature. Just boil it in the kettle. You can even use the microwave, I won’t judge.

3. Scoop the grounds. Add about 1 tablespoon of grounds for each cup of water that you plan to use.

4. Add your water. Pour it on there. Then wait 6-8  minutes, depending on how strong you like your coffee.

5. Press the plunger down. Do this slowly. I like to just kind of heavily rest my hand on there and let gravity do the thing. Think of this as a meditative moment.

The beauty of French Press is that you can make just a single cup or several, depending on the size of your press.