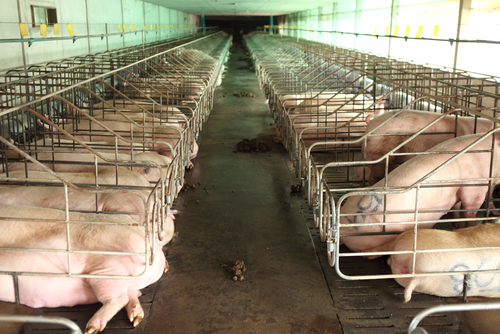 Imagine if you couldn’t send your kids out to play in the back yard or throw open the windows on a lovely spring day because of a ubiquitous, sickening smell. That’s the reality for someone living near an industrial hog farm. A group of North Carolinians are sick of the stench, and they’re suing to get it under control. In the video above you can watch a short Charlotte Observer interview with one of the people involved in the massive hog farm lawsuit.

“The stench is so bad, that whenever you come outside your door you can’t even breathe,” says Dixon.

When you picture a hog farm, you might imagine rolling fields, pigs wallowing happily in mud pits, and possibly a spider with fantastic spelling skills. The sad truth is that most of the pork, bacon, and other meat made from pigs comes from a very different situation. Pigs are big business, and as with any time we treat animals as commodities, industrial hog farmers have scaled up operations to raise as many animals in as little space as possible.

Pigs live in incredibly cramped conditions where they produce waste so quickly that industrial farms dispose of it all in large pools. Maybe you saw the recent Upworthy story making the rounds about these open sewage lagoons. They’re giant pools of pig pee, pig poop, and wastewater. While the Upworthy story is new, the practice is anything but. These lagoons have been around since the 1990s. Here’s an arial view of one of these lagoons:

Hog farm owners use that water to fertilize crops. It’s when they spray the putrid water onto food crops that the smell gets really bad. The water blows to neighboring properties, causing the smell that drives residents like Dixon indoors.

The lagoons aren’t the only problem with living near an industrial hog farm. When pigs die from overcrowding or disease, they’re dumped into “dead boxes.” As you can imagine, the lagoons and the dead boxes combine to attact flies, pollute surrounding water, and produce an unspeakable smell.

Over 500 plaintiffs in North Carolina are sick of how hog farms are harming their quality of life. They’ve filed more than two dozen lawsuites agains the Smithfield Foods subsidiary Murphy-Brown LLC. The hog farm neighbors are suing for damages and asking the court to order that Murphy-Brown LLC stop spraying crops from these open lagoons and dead boxes. Of course, Smithfield’s lawyers say that the case is frivilous and that the “plaintiffs entirely ignore the multitude of benefits stemming from the hog industry, which supports North Carolina’s economy and its citizens.” It’s probably hard to think of those benefits when you’re forced indoors under an air conditioner, because you can’t breathe the air outside of your home. They’ve filed a motion to dismiss the case.

According to the Charlotte Observer, “Legislators passed tough standards [in 1997], including odor controls, that stopped new farms from being built. But existing ones, which each may hold thousands of animals, continue to operate.”

This case only looks at how hog farms impact people. The other dark side of industrial pig farming is the way these poor animals live. Pigs live in cramped spaces where injury and disease are common. They also often suffer at the hands of farm workers who see them not as living beings but as things.

Industrial farming hurts people and animals while wasting precious resources. Hog farms are getting some bad press these days, and I wonder whether stories like Dixon’s and the Upworthy piece will really change folks’ minds. Has learning more about where bacon comes from altered how you view what’s on your plate?