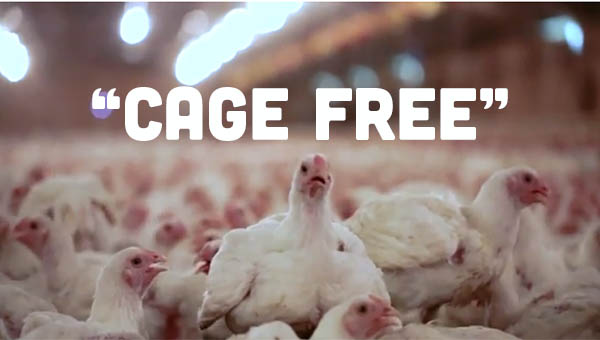 Chicken farmer Craig Watts spoke out about chicken factory farming in a heart-wrenching video. This is what Cage Free, Humanely Raised chickens really look like on a Perdue factory farm.

Watts talks about “consumers being hoodwinked, the farmers being jerked around.” He says that the system is broken, and he’s tired of hiding it. So he invited Leah Garces from Compassion in World Farming to visit his chicken factory farming operation. Watts’s farm produces chicken for Perdue Farms. In the age of ag gag legislation, a factory farmer inviting cameras in is shocking. So-called “ag gag laws” make it illegal for investigators to bring hidden cameras into animal agriculture operations. Factory farms don’t want consumers to see what happens behind the barn doors. This video is a stunning example of why the animal agriculture industry has been pushing ag gag legislation.

As they discuss in the video, Perdue Farms chicken is USDA Process Verified. That means it can bear the labels: The video shows injured chicks and chickens who are clearly suffering.  These “cage free” chicks have no access to sunlight or fresh air. Instead, they live in a crowded, overheated environment. Keeping the chickens enclosed is in the Watts’s contract, because birds who get exposure to sunlight move more and don’t fatten up as efficiently. The video also touches on the genetic problems inherent in breeding animals for food.

The folks at Compassion in World Farming advocate for an end to factory farming practices like the ones depicted in the video. But can we really ever raise animals for slaughter in a humane way? Avoiding factory farmed chicken is a good first step, but does that truly address the larger problems with breeding sentient beings for food? When we think of animals as a commodity, we treat them as commodities.

– Why Vegan? Because Every Death is a Tragedy

– A Complete Guide to Vegan Cooking for Beginners