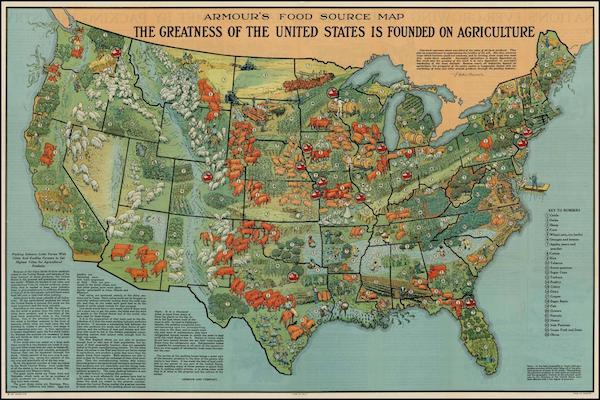 What’s wrong with the state of farming and food in America?  Vox writers Ezra Klein and Susannah Locke posted a collection of maps, graphs, and charts that tell the story in an enjoyable way. You should go take a look at all 40 images, but here are a few of my key takeaways.

In 1922, the meatpacking firm Armour and Company published the festive map at the top of this post. (Here’s a larger version for those like me with old eyes.) Statistically questionable as admitted by the company, the map provides an overview of agricultural products — livestock, seafood, crops — popular in each state at that time. Armour’s Food Source Map boasts: “The Greatness of the United States is Founded on Agriculture.” America was a land of farmers and ranchers.

Since Then, We’ve Lost Farms and Farmers

In 1840, almost 70% of American workers were in agriculture. By 2000, that number had dropped to 2%. Yes — 2%! Farms have disappeared too. Between 2007 and 2012, we experienced a net loss of 90,000 farms across the country. Having said that, farming output has increased as a result of agricultural supply and productivity improvements.

The losses will continue, because our farmers are getting old. In 2012 about a third of them were older than 65.

Cows and Corn are King

The maps in the Vox collection provide us with views of USDA data showing which animals are raised and which crops are harvested in what US regions.

Today, cows are raised everywhere. Who’s eating all that meat? As a country, China consumes the most, but America and Australia are among the top meat eaters per capita. According to the Vox article, “Each person in the US is consuming roughly 250 pounds of meat — that’s about three quarter-pounder burgers a day.”

Corn covers more US land than any other crop. According to the USDA, corn accounts for about 1/3 of crop cash receipts, and corn and soybeans combined make up nearly half of our crop revenues. Where does all that corn and soy go? Mostly to feed all those cows — which is unfortunate since that is not what they were designed to eat.

We’re Getting Fatter and Less Healthy

In 1994, the most overweight states had populations that were about 19% obese. By 2010, 12 states reported their population was more than 30% obese. We’re also eating more calories — 400 more a day compared to 1970 — with a corresponding doubling of obesity in the US to 35%. Most of these extra calories come from grains, sweeteners, fats, and oils — intake of meat, fruits, and vegetables have remained relatively stable. Data also shows that less than half our population eats the CDC’s recommended two servings of fruit and three of vegetables a day.

Cause and result? The collection of 40 pics also shows how our country is blanketed with pizza chains and fast food restaurants. Want to know which fast food chains rule in your area? Check out the map below and maps 26 through 32 on Vox’s site. Interestingly, the maps of obesity and stroke death rates look incredibly similar to that of McDonald’s locations.

Take a look at all 40 farming and food maps, graphs, and charts by perusing the original Vox article. And make sure not to miss map 24 — which clearly proves that Texas is the king of barbecue. Y’all.

Thanks Vox for posting such an information-filled piece!