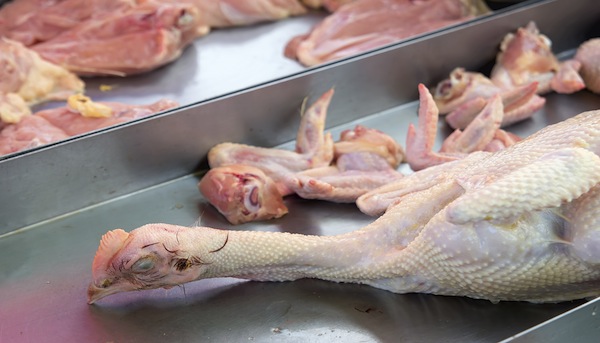 The Animal Welfare Institute and Farm Sanctuary have brought a petition to the USDA over the treatment of poultry during slaughter, reports AP. The groups have data showing that hundreds of thousands of chickens are dropped into scalding tanks while alive every year, despite humane slaughter rules.

The groups are calling on the USDA‘s Food Safety Inspection Service to enforce stronger humane slaughter regulations, which would ban live birds from being dropped into the scalding tanks. “When things go according to plan, birds are already dead by the time they’re dropped into the tank, but a small percentage miss the automatic knife that is supposed to slit their necks and wind up dying in the tank,” reports the AP.

FSIS along with the National Chicken Council note that even though live birds do end up in scalding tanks, the number is a significantly minor fraction of the billions of chickens killed each year. But the animal welfare groups say it’s too many. “Dying other than by slaughter causes tremendous suffering to how ever many birds are subjected to this treatment,” said Dena M. Jones, the Animal Welfare Institute’s farm animal program manager.

Just this month, nearly 70 House members urged Agriculture Secretary Tom Vilsack to abandon a proposed rule for poultry inspection that would speed up the processes of cleaning and inspecting chicken carcasses. Under the new rule, animals would be seen so quickly that even more would be at risk for ending up in the scalding tanks while fully conscious.

AP reports that FSIS Deputy Administrator Phil Derfler said that the Agriculture Department “is using the full extent of its legal authority to protect chickens from inhumane conditions because poorly treated birds can present a food safety concern, and it is ethically appropriate for us to do so.”

Not only is it inhumane for a bird to be dropped into a scalding tank while still alive, but they’re not allowed to enter the food supply, explains AP. “Birds that die by means other than slaughter are called “cadavers” and not allowed to enter the food supply. Last year, FSIS records show, there were roughly 680,000 cadavers, down from around 730,000 the year before. FSIS officials say the majority of cadavers are birds that have been dropped into scalding tanks alive.”