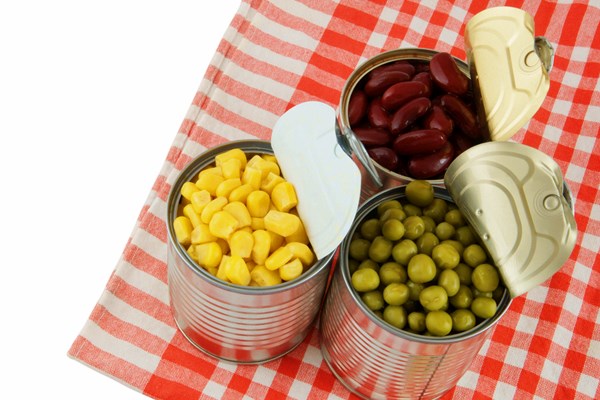 Is BPA safe to eat? According to a recent FDA study, absitively and posolutely! Go ahead and gobble that stuff up, it’s fine! But according to about a dozen researchers close to the project, that BPA study is total bunk — and even worse, the FDA knew it was bunk when they published it.

Bisphenol-A (BPA) is an industrial chemical that acts as an estrogen and endocrine disruptor in living systems. It’s found in polycarbonate plastics and resins commonly used in food and drink packaging, especially cans and plastic bottles. BPA can seep into foods and drinks from these containers, with poorly understood health impacts on consumers.

Health and safety research has produced mixed results, but there’s no shortage of research suggesting that BPA consumption may pose health risks.

According to the Mayo Clinic,

… the National Toxicology Program at the Department of Health and Human Services says it has ‘some concern’ about the possible health effects of BPA on the brain, behavior and prostate gland of fetuses, infants and children. This level of concern is midway on its five-level scale, which ranges from serious to negligible.

According to Environmental Health News, studies show that ‘high urinary levels of bisphenol A in older adults are associated with increased weight and waist size.’ The Journal of Clinical Endocrinology and Metabolism published another study linking high BPA levels to cellular insulin resistance, a metabolic precursor condition associated with diabetes risk, as well as obesity. Research published in Endocrine Today found that ‘higher urinary bisphenol A (BPA) concentrations were cross-sectionally associated with heart disease, independent of traditional risk factors.’

Children seem especially vulnerable to negative outcomes related to BPA consumption. Researchers from the Centers for Disease Control and the Harvard School of Public Health found that baby girls with high BPA exposure showed increased rates of emotional and behavioral problems. A study published by the NYU School of Medicine found a strong link between BPA consumption and childhood obesity in humans, confirming prior research linking BPA exposure and obesity risk among other animal species.

Based on research linking BPA with pediatric health problems, and amid increasingly vocal pressure from scientific and consumer advocacy groups, in 2012 the FDA banned BPA from use in sippy-cups and baby bottles.

Last month FDA researchers published a study in which researchers reported that low level BPA exposure is perfectly safe. You’re probably thinking, ‘Isn’t that odd, since so many other studies have found problems with it? But hey, terrific, that’s great news!’

Actually, according to about a dozen prominent scientists close to the project, it’s the opposite of great news. It means that the FDA knowingly published compromised data, thereby making unscientific claims and potentially endangering public health if BPA actually does (as so many prior studies suggest) pose health risks to consumers.

Apparently FDA and NIH officials informed researchers while the study was ongoing that the project had been compromised: in a conference call, they told the scientists that the lab housing the study was contaminated by BPA — all the test subjects had been exposed to BPA, rendering the control group basically useless for meaningful comparison. So rather than comparing outcomes among animals who had been exposed to known BPA levels with those who hadn’t — which is how the study was designed, and how the FDA reported and interpreted its data — this project actually only involved animals who were exposed to various undefined levels of BPA.

If you like science, your eyebrows are probably in the ‘up’ position right now, because that study design is NOT the same thing as the one that was planned!

But the FDA overrode researchers’ concerns and objections, and published the study as though its results were still meaningful without a control group. As Mother Jones reported earlier this week, a dozen or so well respected scientists strongly criticize the FDA’s handling of the flawed study:

“It’s basic science,” says Gail S. Prins, a professor of physiology at the University of Illinois at Chicago, who was on the call [when researchers were told about the BPA-contaminated control group]. “If your controls are contaminated, you’ve got a failed experiment and the data should be discarded. I’m baffled that any journal would even publish this.”

Details of the control group contamination were stuffed unobtrusively into a quiet corner, towards the end of the published paper. Prins and other researchers involved in the project allege that other data was massaged as well, omitting or misrepresenting negative outcomes. As Mother Jones reported, researchers involved with this project are outraged at the FDA’s disregard for sound science:

“The way the FDA presented its findings is so disingenuous,” says one scientist, who works closely with the agency. “It borders on scientific misconduct.”

There’s a broad swath of research ongoing — a $32 million dollar project known as CLARITY-BPA — working towards identifying the best ways to study health effects related to BPA exposure. Scientists involved with CLARITY worry that the FDA’s misleadingly optimistic publication of a flawed study may interfere with public understanding of future research, effectively preempting their findings.

The FDA has a long history of bungling the ‘F’ piece of their mission statement, despite recent baby steps towards a more assertive paradigm. Their recent handling of BPA — and concurrent manhandling of basic scientific principles — prompts the very opposite of optimism, among fans of sound science and safe food.