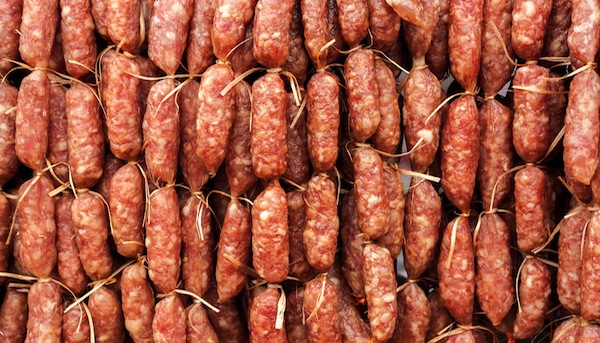 If you have a hair trigger gag reflex, may I suggest some lighter reading, like a story about cute puppies or kittens? Because we’re about to discuss putting (human) poop in (ground up animal) sausage. On purpose.

Let’s not kid ourselves…there is fecal matter in pretty much all animal-based sausages. That’s part of the process of grinding up animals’ unmentionables and stuffing them into casings that formerly held the animal’s actual poop. But this is a different story.

According to ABCNews, Spanish researchers have developed a sausage that’s made from human baby poop. Technically they’re using a bacteria found in infant feces. But I’m sure you’ll agree: Poop is poop.

“[The scientists] took 43 fecal samples from infant diapers provided by parent and midwife volunteers,” reports ABC. “Using three strains of probiotic bacteria they isolated from the dirty diapers, the investigators cooked up several batches of pork that resembled a type of fermented Mediterranean sausage known as feut.”

Why are scientists even considering adding baby poop to sausage?

Because of the bacteria, which they believe can help correct digestive issues, like a probiotic. And, said the scientists, the fermented creation was lower in fat and salt compared to regular sausage. Professional taste testers declared it delicious.”

According to the researchers, probiotics in foods such as yogurt with live active cultures, originate from human bacteria. “For a long time, we tried to kill all the microorganisms in our body – but then we learned that we are designed to be eating bacteria from our environment,” Jeremy Burton, a probiotic researcher told ABC. “We should try to get more of these beneficial bugs into our system.”

But keep in mind that you can get probiotics from healthy foods including (vegan) yogurt, sauerkraut, kombucha and miso. Poop-infused sausage may contain probiotics, but they don’t negate the cruelty and ick factor of eating ground up animal parts.