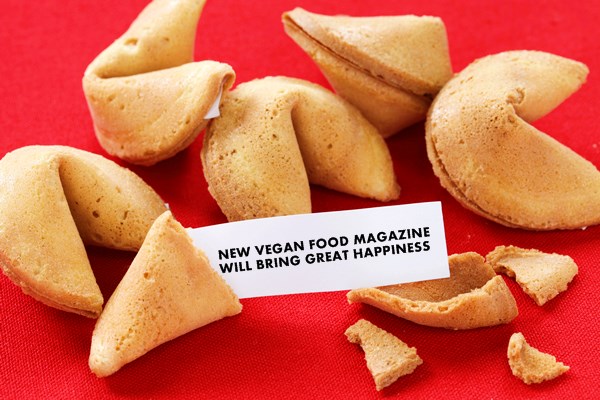 If you love good food and cooking, and you’re vegan or vegetarian or veg-curious, the new Vegan Food Magazine is a must-read! Creators hope to bring the best vegan authors, bloggers, recipes, and kitchen tips to a worldwide audience. The inaugural edition features more than 40 recipes, interviews with some amazing chefs, and a spotlight on the Parisian vegan scene (yes, apparently there is one!). Tired of sorting through food magazine recipes for ‘the good stuff?’ Now there’s a better way: Vegan Food Magazine brings some of the best vegan recipes and cooking ideas instantly to your fingertips — and it’s free!

I had an opportunity to visit with editor Samantha Gould last month, during the final countdown to VFM’s launch. Here’s how she described the project:

SG: We’re an online magazine, and we’re completely free to subscribe to as well. We’re basically all about celebrating vegan food, and how great it is!… It’s going to appeal to  vegans and nonvegans — you know, there are just so many magazines out there that are vegetarian cooking magazines, and you have to sift through it, you have to veganize the menus — but everything [in Vegan Food Magazine] is vegan. It’s 100% vegan, so you don’t have to mess around with it!

Vegan Food Magazine is based in the UK, but targets a worldwide audience.

SG: I want this to be a magazine that everyone in the world can relate to, so in our first issue we have bloggers from Canada, and some from the United States who are contributing recipes; we have an interview with [Isa Chandra Moskowitz] about her book, and with Fran Costigan who’s a vegan pastry chef in New York, she’s got a new book coming out as well. Our next issue I think we’re going to have a French vegan blogger providing recipes — we want this to very much be a global magazine.

Towards this goal, each issue of VFM will feature a specific city from around the world in the context of vegan eating. The first issue focuses on Paris — if you thought all French restaurants soaked everything in butter, think again! Apparently the Parisian vegan scene is alive and thriving; who knew?!

The ‘featured city’ focus is especially neat because it’s a way to specifically promote vegan restaurants to their target audience (us!), and make travelers aware of good veg-friendly restaurants that might not show up in traditional travel guides for a given city or region.

Vegan Food Magazine focuses primarily on the cooking aspect of vegan revelry; but its creators see it as a vehicle for raising awareness about other issues as well.

SG: The main focus is food; however… we do want to still bring in animal rights charities, for instance — the first issue we’re reviewing this café in Scarborough, in the UK, called the Calf Café… all the money from that café goes directly back into their sanctuary… we always want to include something like that in our issues because we want the nonvegans reading it to not only go, ‘Wow, this food is incredible,’ but also gain a bit of extra information about the animal rights side of things…

Eventually once we get up and running… we’re nonprofit, so any profits we do make we want to put straight back into vegan charities and vegan organizations. So it’s going to be a vehicle for raising money and raising awareness, and spreading the vegan food thing!

And what a beautiful way to do it! For the full interview with Vegan Food Magazine editor and co-creator Samantha Gould, grab your ear-buds and have a listen:

Find your free copy of the hottest vegan food magazine to hit the virtual press since, well, maybe ever (!), go here.

Vegan Food Magazine fills a unique niche in the world of vegan food and cooking, and looks poised to offer vegan or veg-curious chefs a treasure-trove of compassionately delicious kitchen ideas.