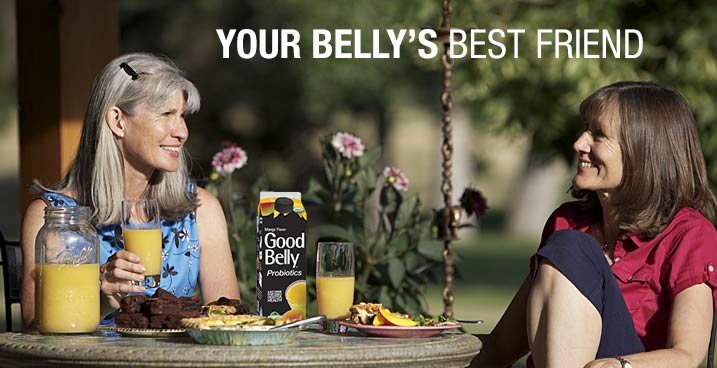 I’m a big believer in the power of probiotics, so when the folks at GoodBelly offered to send me coupons to try their 12 Day Challenge, I said yes, please!

The idea behind the GoodBelly 12 Day Challenge is that it takes just shy of two weeks for a probiotic habit to impact your gut flora. So many digestive issues stem from imbalanced bacteria in the gut, and just like yogurt, GoodBelly drinks are packed with probiotics to tip the scales in your favor.

The thing about taking samples from a company is that they don’t arrive immediately, and while I was waiting I got to thinking. I really wanted to do the challenge, but my stomach is not the one in the Striepe household that could use a little bit of help. I kind of have a belly of steel. Thai hot, curry? Bring it! Coffee on an empty stomach? No problem! Guacamole loaded with extra jalapeno? Don’t mind if I do!

My husband, on the other hand, has a pretty sensitive stomach. Over the years, he’s identified tons of trigger foods, including some he really enjoyed eating. I hate that he has to be so careful about what he eats, so I asked him to do the challenge instead, and he loved it!

Dave and I are both really into juice shots, so he chose the GoodBelly shots as his daily probiotic. Every morning for 12 days he did a shot. He told me that the Blueberry Acai was his favorite flavor, which surprised him. He thought he’d like the Ginger Lemon more, but he thought it was too sweet.

After 12 days, he is feeling great, and he’s started buying GoodBelly shots, now that our coupons are all used up. He said he’s even eaten two of his trigger foods – eggs and jalapenos – and there were no repercussions!

I am thrilled, you guys! The trigger food that makes it toughest to cook for him is tomatoes, so I’m hoping that I can feed him lots of chili this fall now that he’s doing daily probiotics from GoodBelly.

Of course, I am a stickler about ingredients, so I took a look at what all was in these shots that he’s taking every morning. One shot has 9 grams of sugar, which is a little bit high, but lower than you’d find in most yogurts. All of the GoodBelly products are totally vegan and soy free.

Here are the ingredients in the Blueberry Acai shots:

Those polysyllabic ingredients at the end are all vitamins, because GoodBelly also bills itself as a multivitamin. I checked the vitamin content, and the only thing missing that I look for in a multivitamin was iron. If you do decide to use these drinks in place of a multivitamin, you might look into adding an iron supplement.

Have any of you guys tried the GoodBelly 12 Day Challenge? Have you used probiotics to help get your gut flora in order? Let’s talk healthy tummies in the comments!