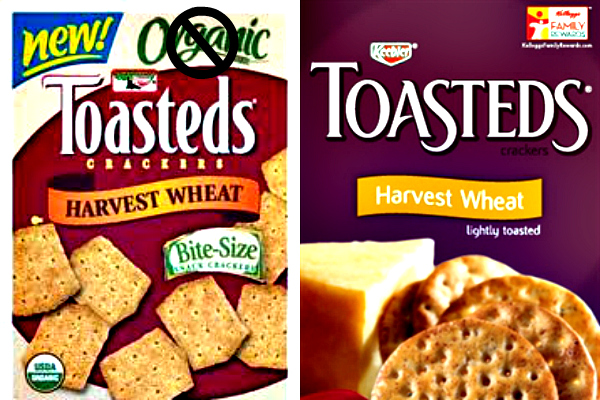 Keebler Organic Toasteds Harvest Wheat Cracker has changed their name. They have taken off the term ‘organic’ from the name and added TBHQ.

The folks at the Feingold Diet alerted me to the new formulation and indeed, the ‘organic’ version of Toasteds can no longer be found on the Keebler website and the posted ingredient list does cite “Soybean oil with TBHQ for freshness.” Keebler introduced the ‘organic’ formulation in 2006 and crackers carried the USDA certification on the packaging. Kellogg Company, which owns Keebler announced in a 2006 press release:

“Kellogg Company constantly strives to understand changing consumer needs.With the growing interest in organic products — the organic and natural food market is growing more than 20 percent each year* [* Organic retail sales have increased by more than 20 percent each year since 1990, according to the Organic Trade Association.] — we felt the time was right to provide this option for consumers.”

Having jumped on the ‘natural’ food band wagon a few years ago, Keebler may now be trying to avoid a class action suit. Probably a wise move. I’m not sad to see a marginal ‘organic’ product removed from the market.  But, I am sad about the addition of TBHQ, which Keebler was free to now add.  At least Kellogg/Keebler isn’t hiding anything.