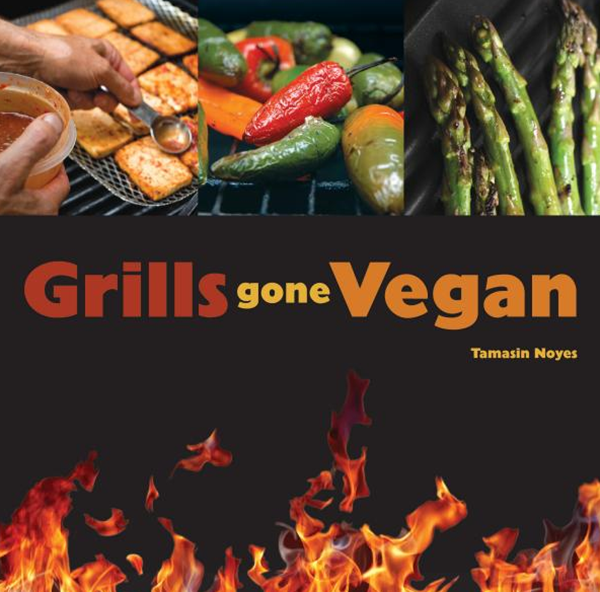 (Author’s note: A free review copy of this book was provided to me by the publisher, Book Publishing Company.)

According to our prevailing cultural narrative, summer is grilling season. In fact, well before the solstice you can count on smelling the inimitable scents of lighter fluid and charcoal.

For vegans (or at least for me), those scents are typically the prelude to a host of other unsavory smells—burgers, hot dogs, chicken wings… Indeed, an invitation to a barbecue is reason enough for a vegan to run screaming in the other direction. Or, when “vegan options” are included in a barbecue menu, they typically take the form of veggie-and-tofu kebabs or frozen veggie burgers—which, whatever their intrinsic appeal might be, lose a lot in the context of roasting animal parts.

All of these complications that vegans face with standard American grilling make Tamasin Noyes’s new book, Grills Gone Vegan, a welcome addition to the vast library of vegan cookbooks. Noyes, the author or co-author of some exciting cookbooks (including Whole Grain Vegan Baking and Vegan Sandwiches Save the Day!) and active food blogger, offers up a surprisingly large selection of recipes that do more than just help vegans keep up at the grill. They also prove that vegan grilling can be an art unto itself.

Noyes comes across as a skilled, thoughtful guide to this art. As with most cookbooks, she begins with introductory material that eases newbies and pros alike into meatless (and eggless and dairyless) grilling. Being a curious fellow, I enjoyed reading Noyes’s advice on things such as maximizing grill flavors, heat levels and temperatures, and menu selections for specific occasions (which I found particularly helpful). Adept guide that she is, Noyes even includes a sidebar with key points from her intro (16). Similarly helpful “Cook Smart” tips appear in most recipes as well.

Grills Gone Vegan is most valuable for the great selection of recipes it includes—delectable dishes in all categories from appetizer to dessert (even breads), with a wealth of truly intriguing flavor and ingredient combinations. For example, I would never think to add a little fresh basil to a Mango and Blueberry Cobbler (147), which my wife and I made and absolutely loved—the cardamom, another surprising touch, only added to the deliciousness along with the basil, maple syrup, fruits, and shortbread-esque topping. Other compelling recipes included grilled maple-glazed grapefruit (140), and “smoky” seitan with pomegranate seeds on a salad (81).

I also would not expect to find a salad in a grilling book, but such is the approach Noyes takes in her book. She provides countless opportunities to incorporate more grilled plant-based ingredients into one’s diet. Much in this same spirit, perhaps, she primarily uses ingredients that are readily available in most grocery or natural foods stores—which I appreciated, as I did her inclusion of nutritional information for every recipe and the frequent instructions for preparing recipes indoors and/or in an oven.

My only criticisms of Grills Gone Vegan are fairly minor. The book could benefit from more photos; there are only eight in the entire book. Though they are full page and color, their infrequency leaves one wanting to see more of the food, not just read about it.

More importantly, as an ethical vegan I also would love for this (and every) vegan cookbook to include at least some discussion of the reasons and need for going vegan, to show that veganism is about more than just diet. Lindsay S. Nixon does this in The Happy Herbivore, for example (though unfortunately animals are at the bottom of her list of reasons to go vegan, and humans at the top). Admittedly, cookbooks are almost exclusively about food for humans. But veganism is, at its heart, a philosophy and a lifestyle that centers on compassion for other creatures based on the recognition that we humans are but one part of an ecosystem, not the apex or masters of it. Our food choices, by being plant based and cruelty free, are one manifestation of this. I would urge all vegan cookbook authors to provide at least some information about ethics/philosophy, which may be the first introduction to these ideas for cookbook readers.

These few flaws aside, Noyes does a masterful job with the daunting task of veganizing the grill, providing ample guidance that can get anyone out cooking and abundant flavors to please every palate. And while Grills Gone Vegan is a perfect source for vegan summer fare, it is easily a cookbook worth cracking open in any season of the year.