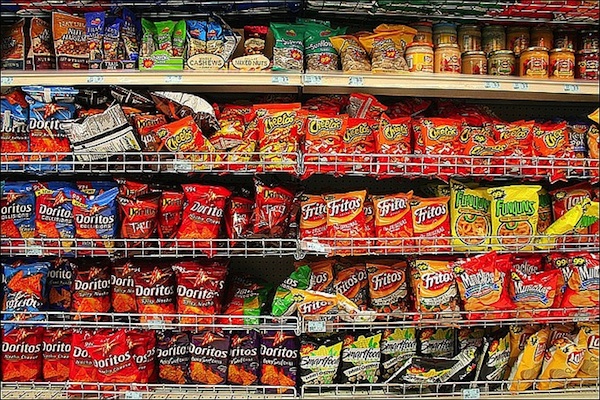 That “zero trans fat” claim on your bag of chips may be a big, fat, wicked lie.

Trans-Fat Free? I Think Not.

I’m at a family reunion this week, surrounded by Fritos and Cheetos — two of my favorite snack foods. So I took the time to “fooducate” them. I learned that if you plan to eat chips, Fritos aren’t the worst choice you can make. (Good news.) I also learned that products claiming to be trans fat free may in fact not be. Here’s why…

If there is less than 1/2 gram of trans fat in a product, the Food and Drug Administration (FDA) allows the manufacturer to label it trans fat free. What? I understand the concept of rounding — but the last time I checked 0.49 grams ≠ 0 grams.

This is a big deal. Consuming this unnatural “ingredient” has been shown to increase your risk of heart disease, obesity, diabetes, and depression. A recent article by Michael F. Jacobsen, Executive Director of the Center for Science in the Public Interest (CSPI) calls trans fat a “metabolic poison” and the “most dangerous fat in the food supply.” It raises your levels of artery-clogging bad cholesterol (LDL) while lowering the good stuff (HDL). In fact, research indicates that trans fat consumption causes between 72,000 and 228,000 heart attacks a year in the US, about 50,000 of which are fatal.

Mr. Jacobsen’s article, titled “The Deadly Fat Lurking in the Supermarket – Still!“, goes on to say (the bolding is my addition):

“According to the Institute of Medicine, there is no safe level for trans fat intake, and the American Heart Association recommends limiting it to less than 2 percent of calories per day. That’s about two grams. Unless you’re a vegan, that’s about as much as you can expect to get from the smaller amounts of naturally-occurring trans fat in milk and meat. In other words? There’s no room in your diet for anything partially hydrogenated.“

“For every extra 2 percent of calories from trans fat daily, the risk of coronary heart disease increases by 23 percent. Eliminating industrial-produced trans fats from the U.S. food supply could prevent between 6 and 19 percent of heart attacks and related deaths, or more than 200,000 each year.”

How to Spy Trans Fat and Make Sound Choices

To avoid trans fats in the packaged foods you buy and take nutritional matters into your own hands:

I become more cynical about food labels as I learn about situations like this. Do you feel cheated too? Join me in my rant by commenting below.