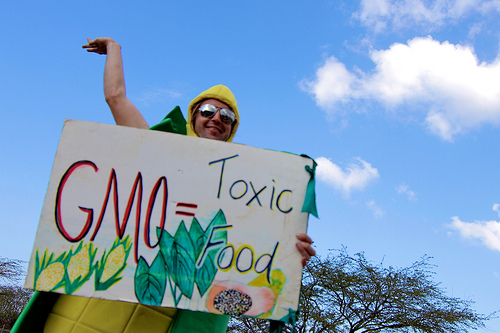 GMO, or genetically modified organisms, are plants and animals that have been altered at the level of their DNA. These organisms are commonly sold to farmers to grow for human consumption. The Food and Drug Association (FDA) has approved a number of GM plants, and is starting to approve genetically modified animals to use for livestock. The genetic modifications made to these organisms may shorten growth periods, and make plants and animals heartier and more resistant to drought, illness, and invasive pests. Many times these benefits are short-lived, as ecosystems evolve and resistance grows.

Many people question whether or not GMO technology is safe to put into our food chain. Despite this the FDA has already approved several GM plants that are currently in our supermarkets and are being eaten by people a daily basis. Many people don’t even realize that they’re eating genetically modified produce. For instance, 88% of all corn planted in 2011 was genetically modified. There are four basic reasons why the safety of GMO technology is in question.

Some GM plants can cross pollinate with other non-GM plants and pass on their genetically modified material in the seeds of these non-GM plants. This contaminates the previously non-modified plant with genetically modified material. The recent discovery of GMO wheat growing wild in Oregon is a good example of how damaging this cross-pollination can be not only to the ecosystem but economically.

If GM plants turn out to be unsafe for human consumption, since they are able to cross pollinate with other plants, we will have a difficult time protecting food supplies that are safe to eat and keeping them from pollinating with the genetically modified plant.

Researchers fed animals a steady diet of genetically modified soybeans and corn found in the food chain. These animals later developed liver and kidney problems that could lead to chronic disease. There have been other studies, 150 in total, showing similar problems for animals and a wide range of symptoms after eating GM foods. These symptoms included stomach ulcerations, enzyme disturbances, growth problems, excessive growth of the lining of the stomach, and kidney, pancreas, and testes problems.

Potential Toxins and Other Health Problems

Put aside the debate about GMO food, for a moment, and consider that there are far more health effects than simply whether the food is safe or not. Agrichemicals like pesticides and herbicides (upon which GMO agriculture is entirely dependent) when applied, hardly ever stay where they are supposed to. They drift in the air, they seep through into groundwater, they are carried by animals and insects, and they are of course residual on the food that is being grown. Residents of Haleiwa, Hawaii, a town neighboring some of Monsanto’s seed corn fields, often complain of respiratory and other health problems by drifting pesticides and herbicides.

But those chemicals are safe, right? Not a chance. They’re designed to kill, and absolutely have negative health consequences. The challenge is proving it. Here’s why.

There is also concern that we may be picking up toxins from GM plants. A recent study found that a toxin called, Cry1Ab, is being found in the blood samples of humans, including pregnant women and fetuses. Cry1Ab is a plant incorporated pesticide found in GM plants. This pesticide does seem to interact with human cells, but further research is needed to determine what exactly is the effect of having it in the bloodstream.

Researchers have found that usage of these herbicides in conjunction with the genetically modified plants is leading to the development of super weeds. These weeds are now naturally resistant to herbicides commonly used with GM plants. Much like the overuse of antibiotics creates super bacteria.

We have much to learn about using GMO technology to create stronger, more productive, and more resistant plants and animals in the food chain. The effects of current modifications on plants in the long term are yet to be seen. These are just four of the potential problems of current GMO technology.

Some great related reading: Jennifer’s things you absolutely need to know about GMOs and the Economic Arguments against GMOs over on the Inspired Economist.

Some rights reserved by ianmackenz