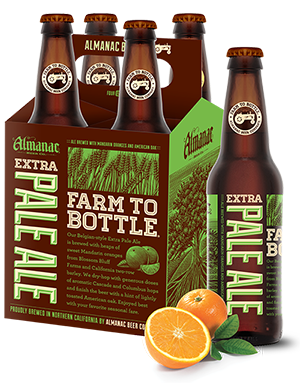 You have to love a beer producer whose motto is Farm To Bottle. Each of their seasonal limited release, small-batch beers is brewed  in collaboration with local farms.  Their offerings include honey and chocolate beer, blackberry and a single origin IPA (made after customers demanded it).

I met with Co-Founder Jesse Friedman in the hip Dogpatch neighborhood of San Francisco in an office stacked with cases of beer and an iconic stag head on the wall. Freedman is one of those entrepreneurs who is a fierce believer in the triple bottom line and integrates sustainability to his entire business process:

We attempt to source as much as we can locally, but we really focus our sustainability efforts with our local farm partners … we focus on organic and the organic process in terms of their farming practices … we are ensuring that they’ll still be around down the road which is really important for us.

Almanac is not only committed to quality and sustainability in a way that makes you feel good about drinking their beer, but their beer consistently wins high praise for its taste. They have been lauded by Food & Wine and Sunset and are winning awards such as The SF Bay Guardian’s Best of the Bay 2012. (I was lucky enough to score some samples and although I’m not a beer connoisseur, my son who is assures me that its very tasty brew.)

And then there are their stunningly beautiful bottles.  I’m a sucker for elegant, appealing packaging (and sustainable) packaging.  Alamanac’s Co-Founder Damian Fagan is the in-house designer and the bottles are stunning. These bottles are a good reason to judge a book by its cover, or rather a beer by its bottle.

For now, Alamanac doesn’t have its own brewery.  Friedman call it gypsy brewing, whereby they brew beer at a local brewery. But, I’m guessing Friedman’s dream of having his own brewery will come true soon enough. I, for one, can’t wait.