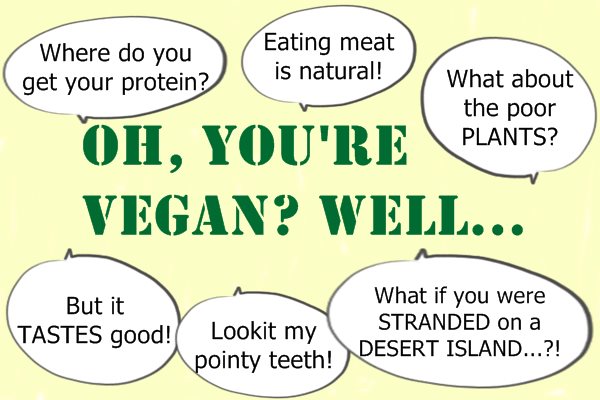 If you’ve been vegan for more than half an hour, you’ve probably noticed that — like taxes or tides — the same set of anti-veg arguments pop up with the predictable regularity of perennial weeds. That 5 millionth time someone asserts unexamined opinion as fact, it can be difficult to respond positively and constructively! But how you respond to common anti-veg myths can change the world, so take a moment to stock up constructive communication strategies, for responding to these common myths and misperceptions about vegan eating.

I’ve been thinking a lot lately about the anti-veg myths that dominate our food culture — where they come from, how they self-propagate, why they’re so persistent, and why they’re often served up into the conversational bowl with such hostility and defensiveness. None of the common anti-veg arguments I’ve encountered are, on their merits, good arguments — but that doesn’t seem to matter, in terms of conviction among those who offer them.

The anger, hostility, defensiveness, and repetitiveness that characterize these remarks indicate clearly that something is going on that has nothing to do with food — or with reason-based analysis of the issues at hand. Hence the tongue-in-cheek creation of Defensive Omni Bingo:

Or just settle for the regular one*.

I’m firmly convinced that the root of these (very typical) defensive responses involves the social narratives we construct, individually and collectively, to help us understand the world and our place in it. As such, it’s not good enough to debunk the facts of the argument — if you eat vegan (or are leaning in that direction), it’s important to understand why these anti-veg myths aren’t good arguments.

Humans don’t in fact need meat for protein, nor do we have the teeth of meat-eaters, nor is it ‘natural‘ for humans to eat meat, etc. etc. etc. It’s important for you to know why these arguments are bunk, so you can respond from a position of confidence when the world slaps them down on your table.

BUT: you can’t rely on reason alone when you respond to these myths! They’re driven not by reason and logic, but by underlying social narratives about humans’ place in the world — specifically regarding our relationship to the other creatures with whom we share this planet.

In order to engage with others whose internal narratives differ so greatly from your own, you can’t simply have the best argument! The only way to pave the way for a shift in perspective — so that your argument can be heard, without emotional defensiveness drowning it out — is to build positive connections with those whose internal narratives justify the eating of animals.

Unfortunately, no magic words or phrases exist to convince non-vegans to jump the animal eater/ plant eater divide. Relationships are key: we must inspire a desire for change, in the context of a positive relationship (even if it’s just for the duration of the conversation), rather than attempting to convince. Food stories are held emotionally; and that’s the domain in which change becomes possible.

There’s no shortage of ideas around the interwebs for responding to anti-veg myths and questions from omnivores. For example:

There’s nothing wrong with any of these — EXCEPT THAT BY THEMSELVES THEY WILL NOT BRING ABOUT CHANGE.

It’s all about relationships: every positive interaction with a vegan (or vegetarian) wears down anti-vegan myths and stereotypes. Remember, it’s more about HOW you say it than about WHAT you say!

Embrace these guidelines for positive communication, and make the most of every opportunity for vegan advocacy:

1. Use the ‘LEAP‘ system: listen, empathize, agree, and partner. Use active listening strategies to draw the other person into actual dialogue — ‘What do you mean?’… ‘Have you always thought animals were for eating? All animals, or just specific ones?’… ’Are there animals you wouldn’t eat? Why?’… ‘Hmm, well, I guess it sort of depends on what you mean by natural… do you mean because humans have always done it?’ … ‘Oh, awesome – another food ethics enthusiast! … what labels do you look for on ‘humane’ animal products? Why?’ LISTEN and reflect back what they say, without judgment or commentary.

2. Empathize with their experiences. Don’t fake it — find it! ‘I was worried about protein too, at first’… ‘I was totally scared of giving up cheese, too! I put it off for ages, because I couldn’t imagine cooking without it’… ‘I grew up the same way! When I was a kid, my mom practically cooked bacon at every meal’… ‘I wouldn’t have thought I could be happy  without cheese either. But sometimes you surprise yourself, I guess!’…’yeah, I get what you’re saying —  if I thought my body really needed something, I’d want to eat it too.’

3. FIND COMMON GROUND TO AGREE ON (yes there always is some)! … ‘I totally agree, it matters how farmed animals are treated’ … ‘We’re definitely on the same page about farmers’ markets, and supporting local growers’… ‘I’m glad we agree that food choices matter!’… ‘I know we both appreciate a good laugh…’ <—(ok, yeah, I’m thinking of the plant pain and desert island questions here… heehee, good times! but I digress…)

4. To the greatest degree possible, put yourself on the same page with the person you’re talking to, rather than positioning yourself as an adversary. ‘Well, it seems like we want the same things: more compassion and less cruelty in the world. I don’t think humane labeling is the best way to get there, but I’m glad our goals are so similar’… ‘I’m always glad to meet other folks who shop their conscience — we may disagree on the details; but for environmentalists like us, food choices are such an easy way to make a difference!’

5. Whenever possible, set up opportunities to be asked for your thoughts — folks are automatically more receptive to information they’ve asked about. ‘Why am I vegan? Because I never heard a good reason not to be.’ Just wait: they will ask about protein, naturalness, ‘pointy teeth,’ and all the rest of it. Say, ‘Do you really want to know? I love to talk about this stuff, but not everyone is really interested…’ and they’ll press you to tell all. Or maybe someone says, ‘Well, you know, eating meat is natural!’… and you reply, ‘I hear that a lot, actually… I have some theories about why so many people think so, even though it doesn’t seem like a very strong argument to me.’ Then wait. THEY WILL ASK, and — because they asked — they will be more likely to listen!

6. Use ‘I’ language. ‘It looks to me like…’ ‘I found out that…’ ‘I don’t want to participate in…’ ‘I watched…’ ‘I read…’ ‘I don’t need…’ ‘I feel like…’ Own it! Not only will it make your ideas more accessible to (defensive) listeners, it’s harder to argue with: no one can tell you that you don’t think or feel something that, in fact, you DO think or feel.

‘But  I Used Those Strategies, and It’s Not Working!’

Remember where the defensiveness comes from — it’s not about you! And it’s not about the relative merit of your ideas and arguments. This is emotion-driven defensiveness, related to clashing narratives about the role of human beings in the world. If — when — you feel attacked, DO NOT respond in kind! It isn’t about you. Stay positive, and walk away if that’s not possible. Getting drawn into a hostile exchange serves no positive purpose!

Be confident, be friendly, and know when to let it go. When it comes to clashing stories about the world, change doesn’t tend to happen overnight. Don’t try to convince: listen, connect, inspire!

Like water on stone, every positive interaction with a vegan wears this anti-veg mythology right on down! So utilize that approach; and expect a similar timeline.

Responding positively to common anti-veg myths, and navigating social situations constructively, can be challenging; but the payoff is potentially world-changing. Like any aspect of vegan eating, contructively responding to anti-veg myths in social situations gets easier with practice. And like any aspect of vegan eating, it’s definitely worth the effort!

Main image by the author