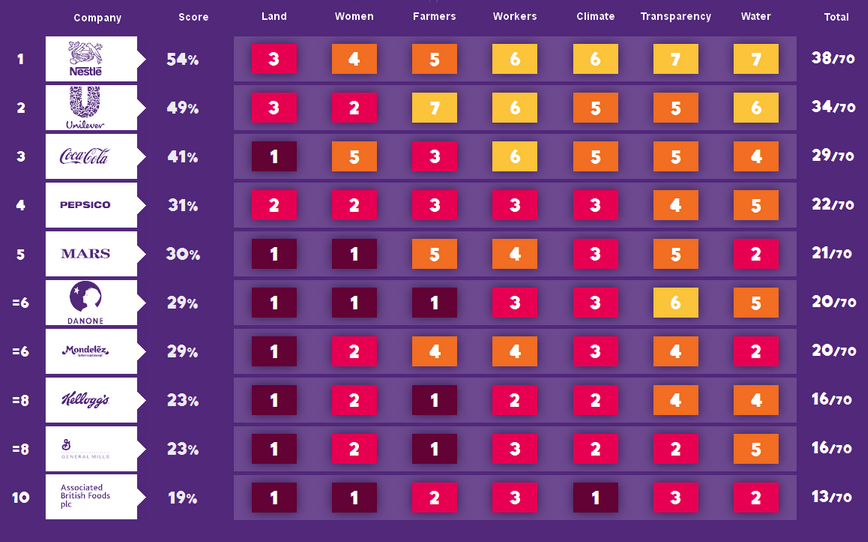 According to Oxfam, the “Big 10” food and beverage companies – that together make $1 billion-a-day – are failing millions of people in developing countries who supply land, labor, water and commodities needed to make their products. Behind the Brands – part of Oxfam’s GROW campaign to fix the broken food system – for the first time ranks the agricultural policies, public commitments and supply chain oversight of Associated British Foods (ABF), Coca Cola, Danone, General Mills, Kellogg’s, Mars, Mondelez, Nestlé, Pepsico and Unilever.

“Some companies recognize the business case for sustainability and have made important commitments that deserve praise. But none of the ten biggest food and beverage companies are moving fast enough to turn around a 100-year legacy of relying on cheap land and labor to make mass products at huge profits, with unacceptably high social and environmental costs. No company emerges with a good overall score. Across the board all ten companies need to do much more.”

Oxfam rated the companies on their policies and commitments towards the sourcing of agricultural commodities from developing countries. The Scorecard looks at seven themes, weighing each theme equally: how they ensure the rights of the workers and farmers who grow their ingredients, how they protect women’s rights, management of land and water use, climate change and the transparency of their supply chains, policies and operations. It did not review other important policies such as those dealing with nutrition, tax and waste, for example.

You can read more about the Behind the Brands: Food Companies Scorecard on the Oxfam website.