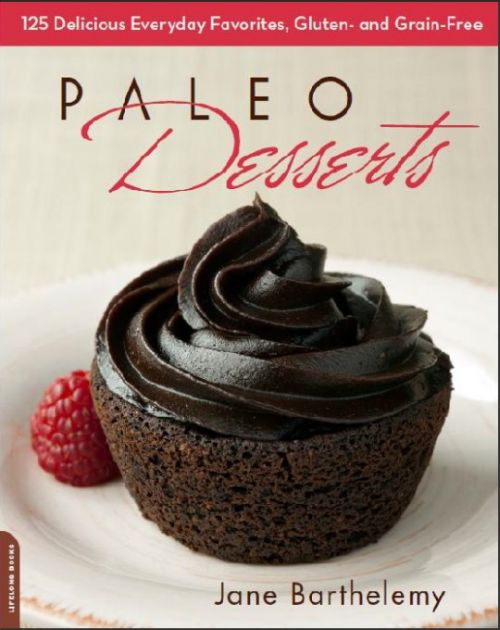 If you think the Paleo lifestyle is just an excuse to eat bacon-wrapped chicken stuffed in a steak, you haven’t seen Jane Barthelemy’s cookbook, Paleo Desserts

, or her blog at Jane’s Healthy Kitchen. Jane Barthelemy bases her recipes on ingredients potentially accessible to people living in the Paleolithic era – and creates 125 vegetarian and vegan dessert recipes.

The Paleo diet was introduced by Dr. Loren Cordain in the 1970s after realizing that the modern diet was not good for people. The processed foods and refined flours were already showing bad effects on the health of people who consumed them. The Paleo diet focuses on fresh fruits and vegetables, roots, nuts, and wild fish and free-range poultry and meat. It excludes grains, legumes, dairy, refined sugars, and processed oils.

Jane Barthelemy takes the idea a little further and doesn’t use high-carb sweeteners, which is nearly every sweetener you can think of. An example she uses is honey. Honey was harvested by people living in the Paleolithic era, but it gives a sugar rush and the author develops her recipes for all-around health.  The sugar rush destabilizes the blood sugar, which she says is the precursor to many health problems.

Despite not using the sweeteners that Americans are used to, the desserts in Paleo Desserts taste sweet, yet they are diabetic-friendly. The recipes are gluten-free, celiac-friendly, low-glycemic, and free of the most common allergens, such as corn, soy, dairy, and peanuts.

There are many delicious desserts that would go well with a Valentine’s Day dinner or any other romantic meal during the year.

The video below is an interview with Jane Barthelemy on Gfree and Happy. The interview begins at 3:50 and she shares a recipe for Instant Mocha Mousse.

After the video is the Easy Chocolate Mousse recipe promised in the title of this article.

Yield: 4 small servings or 2 large ones

Taste it and feel free to sweeten to your taste buds’ liking.

Pour into four small stemmed glasses or two large ones.

Refrigerate for 30 to 60 minutes, or until firm.