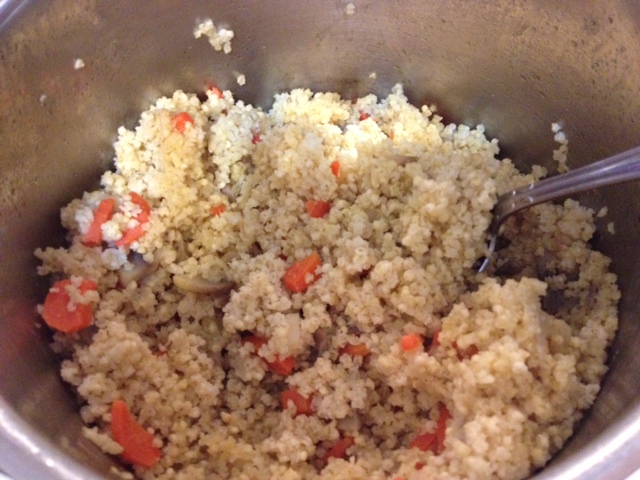 Want to give millet a try but not sure where to start? Here’s a tasty millet recipe that I accidentally created!

I had this fantastic idea the other night to whip up a quick batch of quinoa pilaf and have it with a hearty spinach salad to make a nice healthy winter meal. I reached into my pantry and grabbed one of the unlabeled glass jars I use for my grains and such – I was under the misconception that I had grabbed my quinoa and remained in this blissful illusion until lifting the lid on my finished pilaf. It wasn’t until that late stage of the game that I realized that this was not quinoa at all and after a couple of puzzling seconds, I chuckled and concluded that I had just made millet pilaf. huh…

I have never willingly or knowingly cooked millet. I keep a jar of it in the pantry because it is the basis of my rejuvelac, which I use to start my cashew and nut yogurt. Green Diva Meg’s recipe for cashew yogurt made from millet-rejuvelac

To my surprise, whatever I had done thinking I was cooking with quinoa (including soaking and rinsing before cooking) had worked remarkably well with millet! The taste was a little dull and it needed a bit more salt, but otherwise, not bad at all.

It still cracks me up to think about making accidental millet pilaf, but I thought I would now take a closer look at millet and see what I may have been missing.

What surprised me most wasn’t that it is actually a seed that is generally lumped in with grain because of how it is cooked and served, but that cracked millet is couscous. How did I not know that? I amaze myself with how little I really know sometimes.

The good news – for me – is that it is indeed gluten-free. It’s also high in magnesium, manganese, tryptophan and phosphorus. All good stuff. Here’s a great and thorough post on millet and it’s benefits that I found, and of course the nutritional analysis of millet.