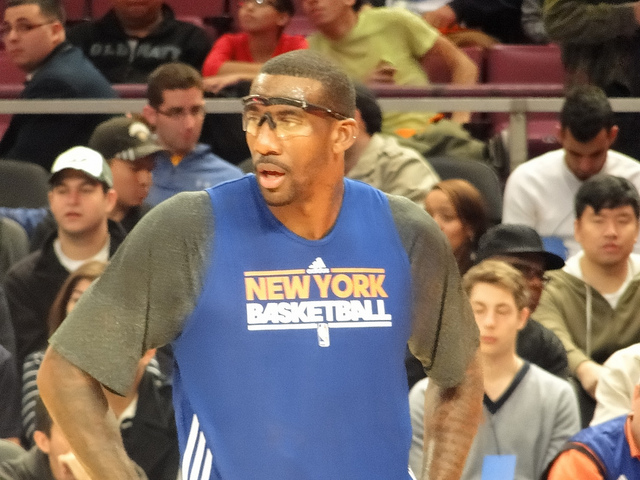 Editor’s Note: This is a corrected version of this article. The original article incorrectly attributed the quote about eating a steak to Stoudemire. Thanks to commenter Jesse for pointing out this error!

A common misconception about veganism is that it’s hard enough to get adequate nutrition for an active lifestyle, but as more and more athletes eat vegan for their health, that perception is slowly changing. The latest athlete to go vegan for health? New York Knicks player Amar’e Stoudemire.

Related Reading: Eating Vegan: Where do you get your protein?

Stoudemire began eating vegan three months ago while he was rehabbing an knee injury, and he says that he went vegan as part of a holistic approach to his overall health, telling The New York Times:

“I wanted to really give myself the best opportunity to remain healthy. And if something did happen and an injury did occur, I could say that I gave 100 percent from nutrition to cardio to lifting weights.”

On top of ditching animal products during his recovery, Stoudemire cut refined sugars from his diet, and he attributes his quick recovery to this whole foods vegan diet.

The Times article also talked about Stoudemire’s teammate, Carmelo Anthony, who tried out a vegan diet for health, but it sounds like Anthony isn’t treating veganism as a lifestyle, more like a fast. After a recent game, Anthony reportedly headed out afterwords for “the biggest steak [he] can find.”

I’ve seen this in other places – people “fasting” by temporarily cutting out animal products – and I think it’s really interesting. Does that mean that vegans like me are constantly fasting? Can you even say that you’ve gone vegan if your veganism has a predetermined endpoint?

I’m all for folks giving a vegan diet a go. Experiments like The Weekend Vegan Challenge seem like a cool chance for folks to dip their toes into eating vegan without committing to a lifetime of plant-based food.

When celebrities like Anthony “go vegan” and then celebrate with a slab of dead cow, though, part of me wonders whether that’s good for the vegan movement overall or not. I’m torn. You’ve got an athlete who talks about a vegan diet improving his health and speeding injury recovery, but then people see him turn around and zealously eschew that diet. I worry that it makes eating vegan look difficult or inadequate, and it doesn’t have to be that way.

Diet is a very personal choice, and a vegan diet is no exception. For many of us, though, veganism is about more than saying no to steak or the numbers on the scale. It’s about compassion and living every day in line with our ethical beliefs.

Or maybe it’s totally OK that veganism is a fast for some people and a lifelong commitment for others. At least for those 15 days Anthony was eating compassionately, and maybe his experience will inspire other people to give it a go.

I can kind of see both sides here. Of course, I’d love to see more celebrities embrace veganism not as a fad diet but a lifestyle, but who am I to judge another person’s lifestyle choices, right? I’m sure I make decisions that don’t jive with other folks’ ideas about what’s ethical.

What do you guys think about all of this?