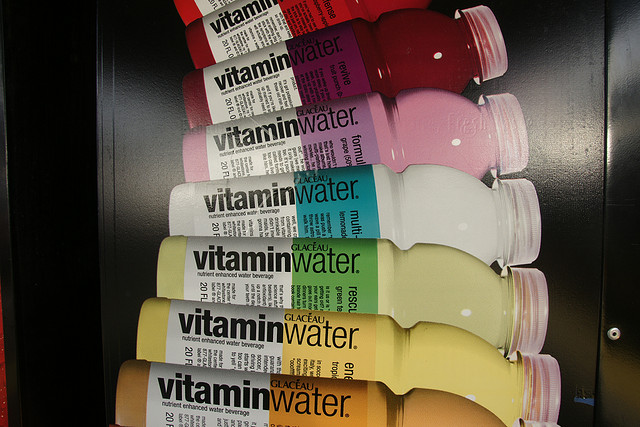 If you’re trying to choose a healthier drink but want something with a little more pizazz than plain ol’ water, you might reach for a Vitaminwater thinking that it’s a reasonably healthy alternative. Think again.

It’s no surprise that consumers think Vitaminwater is healthy. They make their share of health claims, both on the bottle and in their advertising. What Coca Cola – the parent company that produces Vitaminwater – doesn’t want you to think about is the artificial coloring and flavoring or that their “health” drink contains almost as much sugar as a sodapop.

Watchdog group Center for Science in the Public Interest (CSPI) is bringing down a class action lawsuit against Coca Cola for misleading consumers into thinking that Vitaminwater is a healthy drink.

I could get more into the crazy health claims and misleading marketing, but Stephen Colbert did such an awesome – and hilarious – job summing things up on his show the other night, I thought I’d let him explain instead. Check it:

Not only is Vitaminwater full of unhealthy additives and sugars, every one is packaged in a single-use plastic bottle. Boo on that! You can save money and reduce packaging waste at the same time by whipping up your own truly healthy alternatives to Vitaminwater at home. Here are a few ideas for ways to add flavor to your water

I actually like water on its own, but if you’re used to drinking sodapop or Vitaminwater, plain water might take a while to taste good to you as your palate adjusts. What tricks do you guys use to spice up your 8-10 glasses a day?

Vitaminwater isn’t Coca-Cola’s only attempt to appeal to health-minded consumers. The company just launched a new ad campaign touting its diet drinks, front-of-package labeling, and line of smaller cans as their contributions to the fight against obesity. The former is a particularly dodgy claim, considering that there’s some evidence that the artificial sweeteners in those drinks contribute to our obesity problem.

Want to take a look at Coke’s latest stab at healthwashing? Here’s a peek at their newest ad campaign: