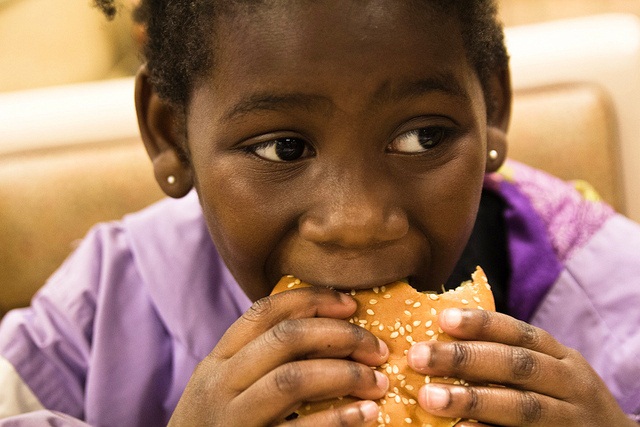 Since virtually all health care professionals and nutritionists agree that Americans just don’t consume enough fast food, Burger King has bravely stepped forward to propose a solution: fast food home delivery service! If the trend catches on, why, soon we’ll be able to consume a full day’s worth of calories in each meal– made from genetically modified high fructose corn syrup, chemical stabilizers, artificial dyes, and various fat-soaked edible foodlike substances — without even getting off the couch to walk to the car. Perfect!

Of course there’s some heavy-duty sarcasm here: no health care professionals, ever, of any description, encourage US food consumers to eat more fast food. Indeed, our fast-food habits continually decimate our nation’s health, earning well-placed concern from the medical establishment seeking to tend it. Despite recent gains in some parts of the ‘food revolution’ movement, if fast-food delivery services do become widely available, it could represent a huge step backwards for America’s (already problematic) food culture.

Earlier this year, Wendy’s bumped Burger King from second to third place in the fast food wars. Hoping for reascendance up the corporate- junk-food ladder, Burger King wants to revolutionize the industry by being the first fast food restaurant to offer home delivery.

According to Forbes, “[Burger King has] got a delivery website set up, which shows delivery available for 34 stores in Florida, 13 in New York, 11 in Texas, nine in Maryland, and eight in Virginia,” with plans to expand the service nationwide.

They’ve developed some “proprietary thermal packaging technology” to address what is clearly the most significant problem with this idea: the relative crispness or uncrispness of the junk food being delivered.

Other fast food behemoths like McDonalds have dabbled in delivery to businesses, in some metropolitan areas, but Burger King’s expansion into the delivery market represents the first time a fast food company has seriously explored such a concept. If it’s successful, other fast food companies will likely follow suit.

Thank You Sirs, May We Have Another!

America’s fast-food-fueled obesity crisis is no state secret. Based on current trends, a report released earlier this year predicts obesity rates above 44 percent by 2030 in all 50 states. According to ABC News coverage of this study,

These rising rates translate into increased disease. The number of new cases of type 2 diabetes, coronary heart disease and stroke, hypertension and arthritis could increase 10 times between 2010 and 2020 and then double again by 2030. The cost of treating these preventable obesity-related diseases is estimated to increase from $18 billion per year in 2011 to $66 billion per year by 2030.

Experts not involved in the analysis or the report agreed that the effects of obesity are profound.

“Obesity is on the causal pathway to every major chronic disease that plagues our society — heart disease, cancer, stroke, diabetes, pulmonary diseases, arthritis,” said Dr. David Katz, director of the Yale University Prevention Research Center. “So it is best thought of as the canary in the coal mine of chronic diseases. As goes obesity, so goes health.”

Fast food, and the ‘cheap-crap-food culture’ it facilitates and reflects, plays a hugely culpable role in these largely preventable health problems. For both obesity and diabetes, ease and frequency of fast food access increase health risks. Recent research indicates that it’s even worse than we thought: A new study, published in the Canadian Journal of Cardiology, indicates that damage to the arteries occurs almost immediately after just one — that’s right, one — junk food-type meal.

I propose for consideration that INCREASING ease of fast food access will not change the world in any positive way, and is the very opposite of a good idea.

Someone relay that to Burger King, please and thank you!