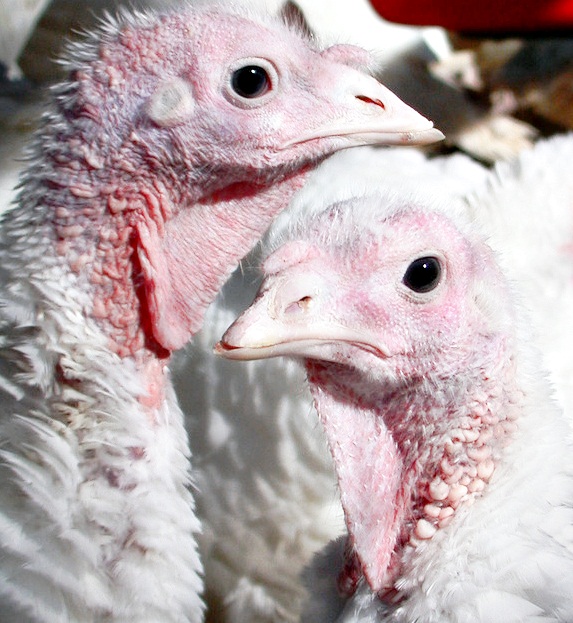 For the second time in less than a year, Mercy for Animals recently caught Butterball workers engaging in acts of extreme animal cruelty; in related but largely unremarked news, all over America people are working busily to subsidize this very company’s continued egregious behavior. Undercover investigators offer a glimpse of truth, if we choose to see it: our food system is deeply broken, riddled with cruelty, reliant on secrecy, and directly opposed to the values of the people it feeds.

According to ABC News,

A hidden-camera video released [last] Wednesday by Mercy For Animals shows workers in October 2012, apparently kicking and stomping turkeys, dragging them by their wings and necks, and slamming them onto the ground, on top of other birds or on transport crates. The group said on its website that the birds suffered from “serious untreated illnesses and injuries, including open sores, infections, and broken bones.”

If you can stand to see them while they’re still birds, and not just meat on your plate, here’s the video:

A prior MFA investigation revealed systematic and entrenched animal cruelty within Butterball facilities last December, resulting in criminal charges against Butterball employees. Workers were documented “violently kicking and stomping on birds, dragging them by their wings and necks, forcefully throwing turkeys, and bashing in the heads of live birds with metal bars.”

The corporate spin was quick and glib and predictable. As reported in December, 2011:

After the raid began, Butterball released a statement, saying it has a “zero tolerance policy for any mistreatment of our birds” and said the company was conducting its own investigation into the allegations.”At Butterball, LLC, our number one priority is to provide for the health and well being of our birds in order to produce safe and nutritious product for consumers,” the statement says. “Butterball takes these allegations very seriously and fully supports the efforts being made on the part of officials… Employees found in violation of Butterball’s animal welfare policies will be subject to immediate termination.”

So here we are, just 3 months after criminal sentencing related to THAT Butterball cruelty bust.  And they’re caught on tape again. Doing the very same things. Again. Still.

What does Butterball have to say about all this? (I just bet you can guess!)

Butterball said it has a long-standing zero tolerance policy for animal abuse and remains committed to the ethical and responsible care of its turkey flocks. The company said an internal investigation is under way and the workers in question have been suspended.

“Any employee found to have violated our animal care and well-being guidelines, as well as any employee who witnessed abuse and failed to report it, will be terminated,” the company statement said. “When we learn of any instances of animal mistreatment, we take immediate corrective action to suspend workers involved, conduct a swift investigation and terminate their employment with the company.”

Let me just clarify something, for the benefit of corporate executives or marketing specialists in charge of coming up with press releases, during times of Butterball PR crisis: we are just not that stupid!

Maybe Butterball feels like they don’t really have to try to come up with something better: the public seems keen on blissful ignorance, when it comes to the ‘production’ of the animals they eat.

But — for comedic value if nothing else — let’s just quickly recap the story that’s being floated, by Butterball pressmeisters, after being caught red handed (quite literally) for the second time in less than a year engaging in egregious animal cruelty:

The nation falls all over itself in its urgent demand for turkey dinners, absolutely brimming with enthusiasm to subsidize Butterball in what is clearly entrenched and continuously hideous behavior. And despite their inept attempts to paint it as an isolated aberrant event when it clearly isn’t, the problems aren’t just Butterball’s — go to any of the animal factories that supply America’s cheap-meat habit, and you’ll find the same or worse offenses.

Oh wait, that’s right: they won’t let you — you’re a ‘terrorist‘ if you try — and if you’re like most American omnivores, you probably don’t want to see it anyway. I’m surprised you’re still reading, actually!

‘I don’t have the stomach for it,’ I’ve heard people say — with presumably unintended irony — when asked to consider the issue of routine systemic institutionalized inexcusable cruelty, towards the animals they eat.

The vast vast vast majority of turkeys that wind up on Thanksgiving tables lived and died in conditions exactly like the ones on those MFA undercover videos — the kind of undercover witness-bearing that most omnivores can’t allow themselves to see. Not being into animal sadism, most people who think nothing at all of eating turkey meat (at Thanksgiving or any other time) can’t stand to watch what happens to them while they’re still real live birds: it’s just too distressing.

That’s a pretty sizeable disconnect, don’t you think? If it’s unbearable to watch this kind of animal treatment… how can it possibly be bearable to support it?

I hear some of you saying, “But I bought a FREE RANGE [or organic or ‘cage free’ or ‘humane’ or whatever marketing term you like] turkey!” And I do hear, too, your intent to do less harm by not supporting factory farming.

These are ‘free range’ turkeys.

It’s a marketing term; not a meaningful one, in terms of animal treatment. So-called ‘free range‘ turkeys endure the same hardship during transport, often after enduring the same crowded and miserable conditions, to die unnecessarily at the very same slaughterhouses as their factory-farmed cousins. Optional violence is never ‘humane,’ whatever label marketing consultants or entrepreneurial animal farmers decide to slap on the package.

We can talk through the specifics of this particular issue another day; there is at least some common ground to cover, in that both veganists and Pollanesque ‘free-rangers’ value decision-making based on (at least theoretically) causing less harm, relative to the animal-factory model.

But the root of the matter — as I see it — is that violence begets violence. Commodification of  living creatures guarantees cruelty, ensures abuse, and mandates atrocity: if profit can be made by treating other creatures poorly, that’s what our food system will do. No matter what philosophical car we drive, that’s the road we follow when we agree to engage in optional systematic violence towards other living things, just to satisfy our own desire for pleasure.

Human pleasure and profit make poor excuses for violence: that’s the bottom line, in my view.

And in every category not labeled ‘food,’ I think most folks agree with me. Most people who’ll sit down to Thanksgiving dinner with one of Butterball’s (cruelty-soaked misery-ridden) turkeys on the table don’t approve of animal cruelty; they feel disgusted by dog-fighting rings and puppy mills and cat torturers, and would report neighbors to authorities if someone near them neglected an animal to the point that he or she suffered from open sores and broken bones, with no veterinary care — in short, most people are not sadists. Most people — most meat-eating people — cringe at the sight of an animal suffering.

That’s why we must romanticize our own (wishful) ideas of happy farm animals frolicking gaily about, in order to feel good about continuing to put them on our plates; we must fiercely avoid any evidence that could reveal the brutal reality in which farmed animals actually live and die, before their parts become just meat on a table.

“Custom will reconcile people to any atrocity.” — George Bernard Shaw

Psychologist Melanie Joy has researched and written extensively about this persistent (and oddly food-specific) pattern of dissociation, between what we think or value and what we actually do — and about the belief system that must prop up such an otherwise distressing set of habits. In her book Why We Love Dogs, Eat Cows, and Wear Pigs, Joy writes:

We don’t see them because we’re not supposed to. As with any violent ideology, the populace must be shielded from direct exposure to the victims of the system, lest they begin questioning the system or their participation in it.

Undercover investigations like this latest Butterball debacle can provide rare and jolting glimpses of truth, if we’re willing to look: if our actions matched our values, we wouldn’t need our food to be invisibly produced. We wouldn’t need to turn away from evidence of atrocity, in order to preserve our ability to comfortably eat it. We wouldn’t subsidize what we abhor.

To love companion animals, condemn animal cruelty, and yet sit down to ‘a nice turkey dinner’ (a product of deliberate, intense, systematic, and severe institutionalized violence towards animals) requires some seriously dissociative mental gymnastics — and on an Olympic scale. We’ve learned to tolerate a food system dependent on secrecy, cruelty, and our own constant self-deception about what we’re actually doing.

One key characteristic of a good idea is that it doesn’t need to be kept invisible, so as not to make you cringe. When food choices and food production realities don’t fundamentally conflict with your individual and cultural values, it’s not necessary to keep them so desperately hidden — not from your customers; and not from yourself.

Each time we glimpse that truth and turn away from it we diminish ourselves, individually and collectively: by choosing to distance our actions from our values, we embrace complacency, apathy, and indifference to the suffering of others.

The implications of that world-view extend well beyond the edges of our plates.