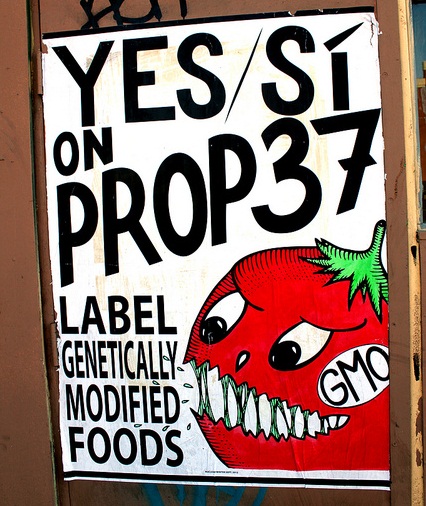 For the first time in US history, California voters this November will have the opportunity to vote for mandatory labeling of foods containing GMOs. Democracy Now hosted a Prop 37 debate this week, and interviewed food writer Michael Pollan on the health, environmental, and social issues surrounding GMO labeling and biotechnology-driven agriculture. As election day nears, industry’s slick and deceptive campaign against the labeling initiative continually saturates the CA airwaves. Democracy Now’s coverage offers a grass-roots education and rebuttal opportunity: read, watch, consider, and share!

Next Goodman interviews well-known food writer Michael Pollan, delving into some of the underlying issues and possible repercussions surrounding Prop 37 and GMO agriculture. I disagree with huge tracts of Pollan food philosophy, but he absolutely excels at distilling vast knowledge about the US food system into concise and accessible overviews. Pollan’s insights here are spot-on.

Pollan goes on to talk about the unique value of local grass-roots initiatives like Prop 37 in shaping the national dialogue on food policy, not only on GMOs specifically but on every aspect of our food system and the politics that drive (and are driven by) it.

As brought to light in this series of interviews, the historic 2012 California ballot initiative known as Prop 37 could mandate sweeping changes in our food and agriculture systems, by challenging biotechnology companies to embrace transparency and defend their products in the (free market) light of day.

If you don’t think GMO agriculture is a good idea, mandatory labeling makes it easier and less expensive (since you won’t have to buy organic-only) to vote with your fork. If you think biotechnology is the absolute (pesticide-poisoned) bee’s knees, and sleep with a jug of Roundup by your bed to use in case of weed-ridden fields of dreams, GMO labeling is still a good idea: it’s the only thing that will make this industry viable in the face of growing consumer suspicion and skepticism, following decades of bad behavior by the biotech bullies.

Under increased consumer scrutiny, they’ll have no choice but to compete in an open market, like every other purveyor of every other product or chemical, earning consumer trust to the point at which people would buy GMO foods DELIBERATELY –instead of only through fierce and persistent industry insistence on consumer ignorance.

If the hypothetical research demanded by a newly well-informed consumer base — the so far strictly hypothetical UNMANIPULATED LONG TERM INDEPENDENT SCIENTIFIC research, not controlled exclusively by the entities with shareholder stakes in GMO products — can stand up to consumer scrutiny, then the industry will be vindicated and they could take a nice valium and calm down the hyperbolic hysterics about people knowing that they’re eating GMOs.

If not, well, then they SHOULD worry about failing, because in that scenario — if hypothetical independent replicable long-term peer reviewed research showed health, environmental, or social justice problems so far cloaked by the kind of secrecy, deception, junk science, and mandatory consumer ignorance the biotechnology industry is clearly striving to achieve in the anti-Prop 37 campaign — well, that kind of industry deserves to fail, without sympathy or support or even so much as a ‘Bless their hearts.’

In terms of citizen benefit, mandatory GMO labeling (and the accountability that will follow, by economic necessity) represents the best path forward towards positive change.