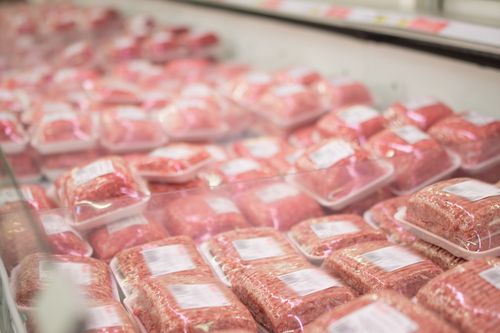 I talked about my adventures in finding lunchmeats and other prepared meats in an unprocessed form. I wasn’t too surprised that so few passed the Kitchen Test. How many of the fresh meats at the supermarket pass the Kitchen Test?

Probably about half the meat at the supermarket is marinated and vacuum-packed in plastic baggies for freshness. None of the marinades passed the Kitchen Test. They all contained lengthy ingredient lists of chemicals, plus natural flavorings.

This advertisement for Tyson Chicken Nuggets says the nuggets are all natural.

With adorable children in the ad, how could we not want to try the nuggets? The ingredients list starts out pretty good: chicken, salt, water. Then ends with natural flavor. In this, Tyson actually does better than a lot of commercially available chicken nuggets. It still doesn’t compare to the nuggets we make from scratch.

Even if you steer clear of marinaded meats and frozen prepared foods, there are still things to watch out for. Chicken often has “solution” added. What’s in that solution? It depends on the manufacturer, but it often includes water and various salts, plus sodium phosphate and other enhancers.

The solution is supposed to tenderize the meat and make the bird juicier after cooking. The biggest effect of the solution is to increase the per pound price of chicken. By not buying “enhanced” chicken, I save money and skip the processed ingredients.

Beef and pork are even trickier. I was always told that to cook a steak safely, make sure the outside is completely browned. If there are dangerous bacteria on the beef, that will kill them. They won’t be on the inside. While that’s true, many practices by beef and pork processors introduce bacteria inside the meat.

Beef and pork might be tenderized through injection or by mechanical pounders which puncture the meat. Both processes can allow bacteria to enter the meat and neither has to be on the label. The only way to know is to ask the producer.

Walking through my grocery store, I found only a few fresh meats that didn’t have additives, but they were stocked prominently and there were plenty of them. This was one of the easier parts of October Unprocessed for me, but I admit I had already done my homework on which meats were fresh and un“enhanced”, for reasons of flavor, cost, and food safety.