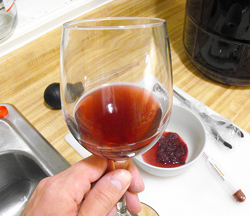 It is known that moderate consumption of red wine has a blood pressure lowering effect and, therefore, can decrease cardiovascular risk. But, is it the alcohol or the polyphenols that are the cause?

A new study slated to be published later this week in Circulation Research and conducted by doctors at Hospital Clinic Villarroel in Barcelona, Spain set out to find out. The study followed sixty-seven men at high cardiovascular risk who were all were given a common diet plus red wine (30g alcohol/day), the equivalent amount of dealcoholized red wine, or gin (30g alcohol/day).  Then their blood pressure and other relevant risk factors were measured.

What they found was that, among the wine drinkers, the group who consumed the dealcoholized red wine had their risk factors decrease more significantly than the group who drank the alcoholic red wine. The alcoholic red wine drinkers, however, were still provided greater cardiovascular benefits than the gin drinkers (the gin drinkers got no significant cardiovascular benefits). The conclusion being that its the polyphenols at work rather than the ethanol.

I’m not at all surprised since it commonly believed that it’s the polyphenols in red wine that are the primary cause of the health benefits. But, once again it was shown that the daily consumption of red wine, albeit especially dealcoholized but still to a lesser extent alcoholic, can be useful for the prevention of low to moderate hypertension. So, since I’m not prone to drinking nonalcoholic wine, it still makes my glass of red wine feel that much healthier.