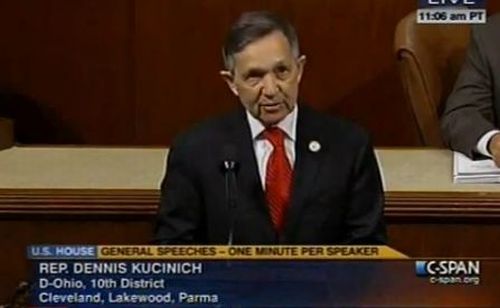 On Wednesday, Rep. Dennis Kucinich called out Monsanto for their influence and corruption of the political process. In his speech on the floor of Congress, Rep. Kucinich referred to both the California GMO labeling ballot initiative and his own national GMO labeling law that is in committee.

The California ballot initiative requiring the labeling of GMOs within the state has gotten a lot of attention lately. Industry groups have lined up against it, spending big money to convince Californians that they don’t really want to know what’s in their food. Even so, the popularity of California’s Proposition 37 has remained steady in polls, with more than sixty percent of voters saying they’ll vote for GMO labeling.

Nationwide polls indicate that more than 90% of Americans believe GMOs should be labeled. (Why the difference in percentages? When something gets on the ballot, specifics in the language of the bill can cause some people to disagree with the proposition, even if they agree with the overall sentiment of the bill.) So why aren’t GMOs being labeled?

The lack of labeling is because of a concerted effort by the biotech industry, Monsanto in particular, to keep genetically modified food from being labeled as such.

The California proposition, if passed, would only affect California foods. For the rest of us, there’s Rep. Kucinich’s Genetically Engineered Food Right to Know Act currently in committee. The bill has thirty sponsors right now. To get it out of committee, it needs more interest. Contact your representative and let them know you want your food labeled.

If you’re in California, make sure you show up at the polls there, too.

A video of Rep. Kucinich’s speech is below and a transcript of the speech is after the video.

“In 1992 the Food and Drug Administration decided that genetically modified organisms (GMOs) are the functional equivalent of conventional foods. They arrived at this decision without testing GMOs for allergenicity, toxicity, anti-biotic resistance and functional characteristics. As a result hundreds of millions of acres of GMO crops were planted in America without the knowledge or consent of the American people: no safety testing and no long term health studies.

“The FDA has received over a million comments from citizens demanding labeling of GMOs. Ninety percent of Americans agree. So, why no labeling? I’ll give you one reason: The influence and the corruption of the political process by Monsanto. Monsanto has been a prime mover in GMO technology, a multi-million dollar GMO lobby here and a major political contributor.

“There is a chance that Monsanto’s grip will be broken in California where a GMO labeling initiative is on the ballot. And here in Congress, my legislation HR 3553 will provide for a national labeling law. Americans have a right to know if their food is genetically engineered. It’s time for labeling and for people to know how their food is being produced.”