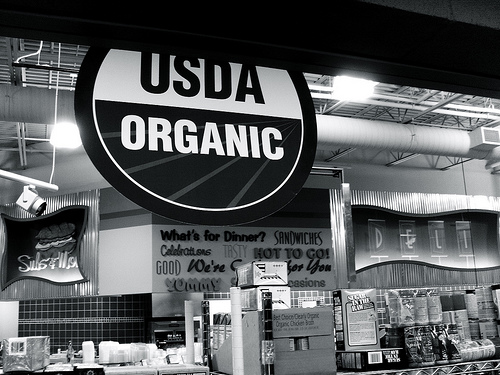 A recent study by Stanford University researchers made international headlines when it claimed that organic foods are no more safe or nutritious than conventional foods, but was it unbiased?

People don’t buy organic food just because they think it contains slightly higher levels of nutrients, they buy organic for many other reasons, primarily to avoid toxic pesticide residues and toxins that have been genetically engineered into the food.

Academics and organic policy experts, including at Cornucopia, immediately recognized that Stanford’s research in fact substantiates dramatic health and safety advantages in consuming organic food, including an 81% reduction in exposure to toxic and carcinogenic agrichemicals. Unfortunately, readers would never know it by the headlines, since the results of the study were spun by the Stanford researchers and public relations staff, and accepted without the necessary fact-checking by journalists in a rush to file stories over the Labor Day weekend.

Not surprisingly, the study’s glaring errors, both in understanding the important and complex differences between organic and conventional foods and in the researchers’ flawed choice of research methods, prompted organic advocates to look closely at financial ties between Stanford’s Freeman Spogli Institute, which supports the researchers, and the chemical and agribusiness industry.

“There was just no way that truly independent scientists with the expertise required to adequately answer such an important question would ignore the vast and growing body of scientific literature pointing to serious health risks from eating foods produced with synthetic chemicals,” says Vallaeys.

“So we were not one bit surprised to find that the agribusiness giant Cargill, the world’s largest agricultural business enterprise, and foundations like the Bill and Melinda Gates Foundation, which have deep ties to agricultural chemical and biotechnology corporations like Monsanto, have donated millions (pdf) to Stanford’s Freeman Spogli Institute, where some of the scientists who published this study are affiliates and fellows.”

Stanford researchers had touted their independence by stating they had not received outside financial support for their study but failed to delineate the close ties between their internal funding sources and industrialized agriculture and biotechnology interests.

Organic advocates also discovered that one of the study’s authors has a well-documented history of accepting research funding from the tobacco industry when a growing body of scientific literature in the 1970s pointed to serious health risks from smoking.

Dr. Ingram Olkin, a Professor Emeritus in statistics at Stanford and co-author of the organics study, accepted money (pdf) from the tobacco industry’s Council for Tobacco Research, which has been described as using science for “perpetrating fraud on the public.”

“Make no mistake, the Stanford organics study is a fraud,” says Mike Adams of Naturalnews.com and Anthony Gucciardi of Naturalsociety.org, who discovered the link between the organic study author and Big Tobacco:

To say that conventional foods are safe is like saying that cigarettes are safe. Both can be propagandized with fraudulent science funded by corporate donations to universities, and we’re seeing the same scientist who helped Big Tobacco now helping Big Biotech in their attempt to defraud the public.

Researchers with expertise in organics became suspicious about corporate funding and other industry ties after finding no other explanation for the Stanford study’s glaring omissions and flaws.

Multiple studies have drawn attention to the negative impacts of pesticide residues on children’s neurological health and development. Pesticides commonly used in conventional agriculture and often found as residues on conventional foods are known to be toxic not only to the neurological systems of insects but also of mammals, including humans, with developing fetuses, infants and children especially at risk.

“When the Stanford researchers left out any mention of pesticide residue impacts on human health, well-documented in a number of respected peer-reviewed studies, it immediately raised a red flag that Stanford’s analysis was likely designed to favor the agribusiness corporations in their desperate attempts to convince an increasingly educated and skeptical public that pesticides are safe,” says Vallaeys.

As an example, the Stanford researchers omitted a 2010 study published in the journal Pediatrics by researchers at the University of Montreal and Harvard, which found that children with higher urinary levels of organophosphate metabolites, breakdown products of commonly used insecticides that are prohibited in organic agriculture, were more likely to meet the diagnostic criteria for Attention Deficit Hyperactivity Disorder.

The Stanford study also omitted any acknowledgement of potential cancer risks from exposure to agricultural chemicals on conventional foods. This seems especially reprehensible to the scientists at Cornucopia in light of the 2009 President’s Cancer Panel report (pdf), which states:

Nearly 1,400 pesticides have been registered (i.e., approved) by the Environmental Protection Agency (EPA) for agricultural and non-agricultural use. Exposure to these chemicals has been linked to brain/central nervous system (CNS), breast, colon, lung, ovarian, pancreatic, kidney, testicular, and stomach cancers, as well as Hodgkin and non-Hodgkin lymphoma, multiple myeloma, and soft tissue sarcoma.

The authors of the President’s Cancer Panel advise Americans to decrease exposure to pesticides by choosing food grown without pesticides or chemical fertilizers. Extensive research, including studies cited in Stanford’s study, indicates that organic food is demonstrably lower in agrichemical residues.

Journalists failed to do due diligence to check the credibility of the Stanford study. Wanting to be ahead of the news curve, reporters rushed out their stories on this study, over a holiday weekend, without seeking the expert advice of scientists who have studied the harmful effects of chemicals used in conventional food products and the documented advantages of an organic diet.